On June 14, 1671, the Pageant of Sault was held, and the French government claimed the territory that would become Michigan.

The French, led by Simon Francois, claimed all the land  — bounded on the one side by the Northern and Western Seas and on the other side by the South Sea — for the French monarchy. They did this before Native Americans, and warned them of the perils the Indians might incur by trading with other European powers.

For another, see Wikipedia Timeline of Michigan history.

For another source, see The Pageant of 1671, American Journeys : Eyewitness Accounts of Early American Exploration and Settlement – A Digital Library and Learnig Center, Wisconsin Historical Society. 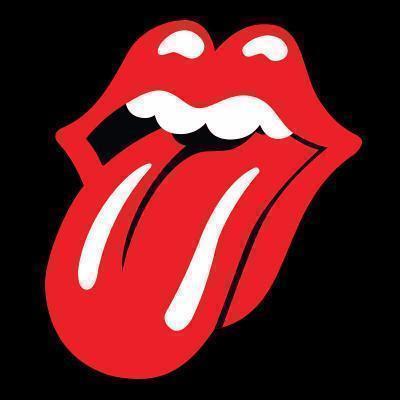 During their first tour in the United States, the Rolling Stones played at Olympia Stadium on June 14, 1964. The band returned to Comerica Park on July 8, 2015.

Review the setlist from the June 14, 1964 concert courtesy of MLive. 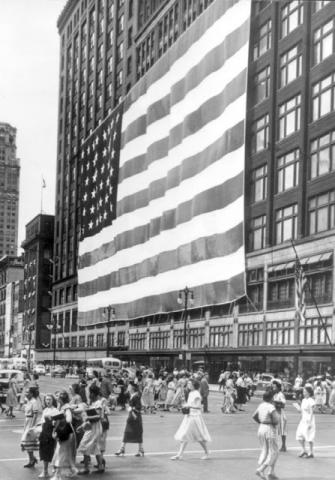 On June 14, 1976, Flag Day, the downtown Hudson’s department store retired their 2nd version of the world’s largest flag. The original flag was first hung on Armistice Day in 1923, displayed on each ensuing year’s patriotic holidays, & was later shown off @ the World?s Fair in 1939. At 3,700 sq. ft., the stars were a half-foot tall, & 1 mile of rope was needed to hang it. This flag was last seen in 1949 & replaced a year later w/a new 7-story flag that required 55 men to hang. After the 2nd flag came down for the last time, it was donated to the Smithsonian Institution.

Two women serving in the state House have been barred from participating in floor debates for one day. The sanction is a punishment for things they said during a debate on anti-abortion legislation the previous day on June 13, 2014.

State Representatives Lisa Brown and Barb Byrum are both Democrats. Brown made a reference to her vagina in a floor statement.

Brown was not the only woman silenced on the floor today. Rep. Barb Byrum was also not allowed to speak on the floor. “Byrum, D-Onondaga, caused a disturbance on the House floor Wednesday when she wasn’t allowed to introduce an amendment to the abortion regulations bill banning men from getting a vasectomy unless the sterilization procedure was necessary to save a man’s life,” the Detroit News reports.

Byrum shouted at the presiding officer after she was not recognized to speak.

Ari Adler is the spokesman for the House Republican leadership.

Brown was speaking during a debate on anti-abortion bills, and has no apologies for what she said.

“I used an anatomically correct word. I said ‘vagina,'” she said. “Can I not say ‘elbow?’ I don’t see what the difference is.”

This is the first time in memory that lawmakers have been formally barred from participating in floor debates.

Congress proposes an end to the Michigan/Ohio boundary issue.

After months of debate, Congress passed the Northern Ohio Boundary Bill (Clayton Act) on June 15, 1836 to resolve the ongoing boundary dispute between the state of Ohio and the Michigan Territory. Both claimed the mouth of the Maumee River (present-day Toledo) and offered surveys supporting their positions. The congressional compromise awarded Toledo to Ohio and granted Michigan the western Upper Peninsula and immediate statehood. Ohio was elated, but Michigan struggled, and eventually accepted a solution they believed was unfair.

At any rate, President Andrew Jackson signed the bill, which also included another carrot for Michigan. If Michigan agrees, it can become a state. Michigan must hold a convention, however, to approve the compromise measure.

For another source, see Important Dates in Michigan’s Quest for Statehood

Statue overlooking the bay in Petoskey.

Some of his descendants knew him as Neyas Bedosegay, while others called him Petosegay, Biidassige, or Peto-osega (Rising Sun). The Smithsonian Institution in Washington, D.C. knows him as Chief Pe-to-de-gah. Whatever the case, today we think of Chief Ignatius Petoskey as the founder of the city on Little Traverse Bay that bears his name.

The son of Antoine Carre (Neaatooshing), a French fur trader, he was born along the northern banks of the Kalamazoo River. According to popular lore his father held him up to the rising sun and said “his name shall be Petosegay and he shall become an important person”.

He grew up in the lodge of his father roughly seven miles northwest of Harbor Springs, nearby the site of the town of Middle Village. At the age of 21, Petosegay married the daughter of Pokozeegun, an Ottawa chieftain from the northern Lower Peninsula of Michigan. He and his new bride, Kewaykabawikwa, planted apple trees to celebrate their marriage and, at the time of his death, they could still be seen by local residents.

Later on, after moving  his family to the southern shore of Little Traverse Bay, he and his elder sons soon acquired much of the land of what is now Petoskey, Michigan and became a prominent merchant and landowner.

By the time the Little brothers arrived in 1873 to establish a post office, “Grandfather” Petosegay was living in a big house up the hill from the river and was a man of influence and respect. The Littles had to choose a community name for the new post office and settled on Petoskey in honor of the chief. He graciously accepted the mangling of his name by those who meant well.

Chief Petoskey died at the age of 98 on June 15, 1885, leaving behind many descendants in the form of great-great nephews and nieces who still live in the area today.

In 2005 the city of Petoskey established a statue of the chief looking out on the bay that he saw for the first time some 230 years ago. The statue has an imposing, superhero quality to it, and its bronze face remains as bright as the “Sunbeams of Promise,” which is yet another translation of the chief’s name.  His name was also given to Petoskey State Park, Camp Petosega, and the Petoskey stone, found in abundance on his former lands. 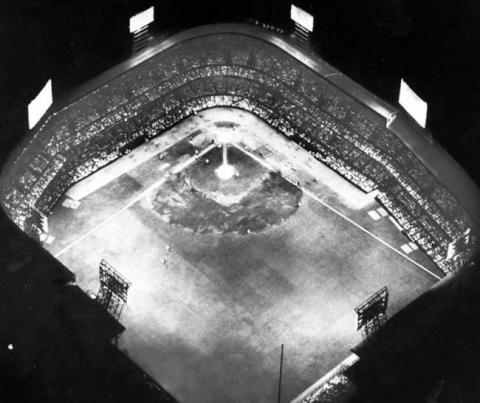 June 15, 1969 – The first NASCAR race at MIS — called the Motor State 500 — set the stage for years of door-banging, paint-swapping, neck-and-neck finishes. Cale Yarborough and LeeRoy Yarbrough battled for most of the final 150 laps in the Motor State 500. On the last lap, they touched twice entering Turn 1, with Yarbrough brushing the outside wall. After drafting down the back stretch, Yarbrough spun coming out of the final turn and crashed just 300 yards from the finish line, giving Yarborough the victory.

Organizers moved the pride parade to Lansing in 1989 with the goal of attracting statewide participation.  That parade drew around 3,600 according to the Lansing State Journal archives.

The U.S. Supreme Court’s 2015 decision to legalize same-sex marriages and growing acceptance among both younger and older generations has also bolstered support.

In 2019 an estimated 6,000 people particiapted in the annual Michigan Pride Parade in downtown Lansing.