George DeBaptiste (1814-1875) was a prominent member of Detroit’s pre-Civil War black community and a leading figure in the underground railroad, in addition to being a barber, bakery proprietor, once-owner of the steamer T. Whitney, an organizer of the 102nd U.S. Colored Troops, a Mason, an active abolitionist and even a personal valet for a short time to the President of the United States.  An activist in both local and national affairs, he was also on speaking terms with such famous figures as Frederick Douglass and John Brown. 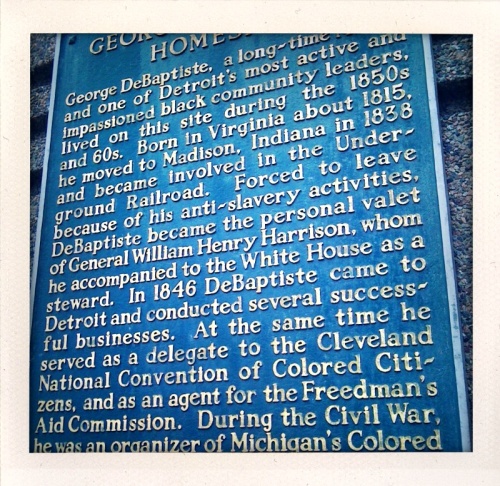 Although never a slave himself, he felt a deep connection with those who were. DeBaptiste attended a few years of school in his hometown of Fredericksburg, Virginia, enough to read and write and perform basic mathematics. After schooling he apprenticed as a barber to learn a trade and eventually became a hired hand for many wealthy whites. One man DeBaptiste assisted was a Southern gambler, and by accompaning him on his poker circuit throughout the south, DeBaptiste undoubtedly witnessed the true face of slavery.

(George DeBaptiste in his early life, Historical Society of Pennsylvania)

Ready to settle down, DeBaptiste moved to Madison, Indiana in 1838 where he opened a barber shop and started a family. Almost immediately, DeBaptiste started doing what he could to help slaves escape slavery.  Madison was a border town across the Ohio River from Kentucky, a slave state.  According to an obituary in the Detroit Tribune, February 23, 1875:

He used to say that he had often waited on the bank of the Ohio River for half the night, while the rain was pouring down, intently listening to hear the oars of an expected boat, which contained one or more fugitive slaves. It was his custom to pilot these fugitives some ten or twelve miles north to the house of a farmer, who kept them secreted during the day, and on the next night would send them on to another stopping place. This method of travel was kept up until they arrived at Detroit, when they were taken across to Windsor. Mr. De Baptiste would usually perform these journeys on foot, walking sometimes twenty miles during the night, returning to his work the next day, probably to shave the man whose slave he assisted to escape the previous night.

DeBaptiste was soon suspected of helping slaves and was cited under black code laws for helping fugitives. DeBaptiste and his family could have faced expulsion from the state if these charges were upheld. He fought the charges in the Indiana Supreme Court arguing that these laws were unjust and unconstitutional. DeBaptiste won, onvincing the judges to at least to allow him to stay in the state. Shortly thereafter Kentucky announced a $1000 bounty for his arrest. Due to increasing common knowledge about his underground railroad activities and facing increasing harassment, DeBaptiste decided to move his family elsewhere.

DeBaptiste next found employment as a personal valet for Gen. William Henry Harrison in 1840 and in 1841 served as his steward in the White House when he was elected President. Unfortunately President Harrison caught pneumonia during his record long inaugeral address and died about a month later.  ( An obituary of DeBaptiste said that at Harrison’s death, DeBaptiste was at his side and held the president in his arms at his last breath.)  No longer employed as a result of President Harrison’s death, DeBaptiste returned to Madison and resumed his previous lifesstyle, including helping fugitive slaves escape.   However, due to continuing and perhaps increasing harassment, DeBaptiste decided to move North to Detroit, which also had a reputation as a key stop on the Underground Railroad and offered a small but vibrant African American community.

In Detroit DeBaptiste was an instantaneous business success. He became a co-owner of a popular barber shop and worked as a sales clerk in a downtown clothing store. Soon DeBaptiste has enough money to purchase a bakery in 1850. George used his business success to try to influence politics and promote emancipation through legal channels, with limited impact.  No wonder DeBaptiste continued to pursue more gratifying but illegal means of emancipation.

DeBaptiste sold his bakery and with the money bought co-ownership of a steam boat named the T.Whitney. Despite being a co-owner of the ship, DeBaptiste could not captain it since captain licenses were reserved for whites. DeBaptiste used this boat for business as well as to illegally transport slaves across the US border into Canada.  To transport slaves DeBaptiste would take his “broken” wagon to a repair shop with a pro-emancipation owner. He would leave his wagon there while in the dead of night the slaves would move from DeBaptiste’s home or the 2nd Baptist Church into the wagon. The wagon was then covered in straw and horse manure. George would cover his horse’s hooves with carpeting to muffle their sound and transport the slaves to the T.Whitney where they were loaded on and marked on the international trade manifest as “Black wool”. DeBaptiste did this for years and it is unknown how many slaves he had helped escape to freedom. The Detroit Historical Museum estimates over 5000 slaves passed through the 2nd Baptist Church in Detroit.

In addition to being a busy conductor in the Underground Railroad, DeBaptiste was also involved in many more visible activism groups such as The Colored Vigilance Committee and The Negro Union League, often funding these groups from his own money gained through his businesses.  He was also a member of multiple secret societies dedicated to anti-slavery activism and activity. DeBaptiste formed an organization that went by multiple names such as “The Order of the Men of Oppression”, “The African American Mysteries”, and “The Order of Emigration” .  And he was a Mason.

Through these activities DeBaptiste came into contact with famous abolitionist figures such as John Brown and Frederick Douglass. John Brown and DeBaptiste were in close contact with another and developed an intricate cypher for communication via telegraph. Messages sent regarding activities of the underground railroad were hidden behind common language. John Brown met with both George DeBaptiste and William Lampert in Detroit to discuss his plans for emancipation (there is a historical marker to that effect). John Brown believed that he could spark a rebellion in the south and that all free black men of the north would join his cause. His target was Harpers Ferry, West Virginia and he was determined to conduct a raid to muster support for rebellion. Both Frederick Douglass had misgivings about the plan, offerred alternatives such as bombing white churches, but failed to convince John Brown of its shortcomings. In October of 1859 John Brown carried out his raid but his small force was quickly overrun resulting in Brown’s execution. However, the raid proved one of the catalysts for the Civil War breaking out soon thereafter.

A supporter of President Abraham Lincoln, DeBaptiste did his best to put together a Black regiment but was stymied by Michigan recruiting practices (no colored recruits, either African or Native American, until much later in the war when losses of life mounted and the white establishment became more practical.  In 1863 he did help organize the 102nd U.S. Colored Troops which enlisted over 1400 volunteers. The regiment left Detroit for service in Florida, Georgia, South Carolina and elsewhere. DeBaptiste accompanied the regiment as a sutler rather than as a soldier, supplying essential foodstuffs and supplies, and serving as an unofficial figurehead.

After the war George returned to Detroit and continued managing his thriving businesses, including catering. DeBaptiste won first prize for his wedding cakes in the 1873 Michigan State Fair!

He also continued supporting multiple efforts to improving the lots of Blacks in general through politics and other efforts. DeBaptiste advocated for the right of black students to attend Detroit Public Schools.   In 1870, he was the first black to be elected delegate to the state Republican nominating convention.  The 13th amendment to the constitution was written but was not fully enforced in the south. DeBaptiste felt it his duty to continue helping former slaves flee north.  On April 7th 1870 a few weeks after the 15th amendment to the United States Constitution was written giving African Americans the right to vote, George DeBaptiste put a final notice on his office building reading “Notice to Stockholders — Office of the Underground Railway: This office is permanently closed.”

George DeBaptiste died of cancer in 1875 and was survived by his second wife, a son and daughter.  Prominent obituaries appeared in Detroit papers on February 23, 1875.