Chinaman Chan Hoy of Grand Rapids announces he will ignite 25,000 firecrackers in front of his laundry on July 4th, demonstrating for one and all his patriotism.

At a cost of between $1700 and $1800, Chan Hoy has started his second Chinese restaurant in Grand Rapids, and brought in a Chinese cook from San Francisco to help run it.

Three men working in the laundry business around 1875 were the first Chinese residents of Grand Rapids. The Chinese population of Michigan in 1880 consisted of twenty-six men; twenty-four were operating laundries, two of the 26 were in Grand Rapids.

Even though they were so few, as early as 1876 the Grand Rapids Times made note that several “washee men” celebrated Chinese New Year. Almost every year fascination with this unusual New Year inspired the newspapers to note this event, who attended, and what they did to celebrate.

This tiny community of Chinese men lived in almost complete isolation from their neighbors except when conducting business. On Sundays they would gather together, usually at one of the laundries, where all of the mail received from China would be read aloud. They would play mahjong or cards. Much rice was eaten and much tea consumed and they smoked their water pipes

The laundry business was the most common trade of the Chinese. First, it could be started with literally no capital, and second it didn’t take work away from Americans. Even so, in 1899 the local Carvers Union passed a resolution urging all union members to discontinue their patronage of the Chinese laundrymen. One union member, a painter, said that the Chinese were the only ones in town who would undertake the job of washing his overalls and he would continue to patronize the Chinamen. His was the only dissenting vote on the resolution. The article also noted that it was unlikely that the painter would be disciplined in the matter.

On a related note and at approximately the same time.

Several Chinese immigrants owned laundries in Copper Country communities. Houghton County had ‘s largest population of Chinese immigrants in 1900. The Chinese Exclusion Act of 1882 limited their careers, so many opened laundries. https://This photo was taken at a Calumet photo business and is still available thanks to the Michigan Tech Special Collections. 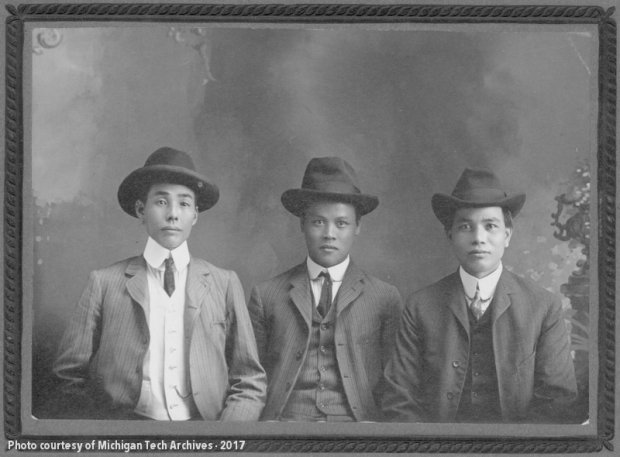