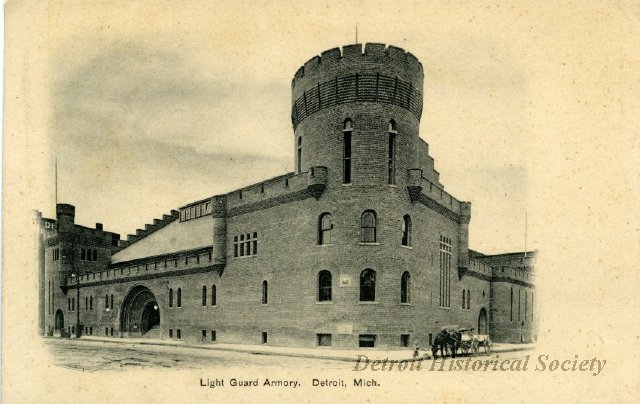 Between February 26 and March 1, 1902, William E. Metzger, president of the Tri-State Automobile and Sporting Goods Association, charged the public 25 cents to attend an automobile and sporting goods show at the Detroit Light Guard Armory.

According to the Detroit City Directory, thee were now 10 automobile dealers in Detroit, with Metzger’s establishment on the Northwest corner of Bush Street and Jefferson Avenue touted as the largest in the United States. Although some of the attendees might have been more interested in the sporting goods, including bicycles, displayed, large crowds did turn out to see competitions between electric, steamer, and gasoline vehicles. R.D. Camp’s rollers and and dials measured auto speeds at what was billed the Speedonome. (It was the last year the Speedonome was available for the show since it was subsequently purchased by the Olds Motor Works for internal vehicle testing.)

Was it the first official auto show in Michigan? Readers may want to take a look at Robert Szudarek’s The First Century of the Detroit Auto Show and make their own decision. William Metzger and Seneca G. Lewis (from the Fletcher Hardware Store Sporting Goods Department) actually organized the Tri-State Automobile and Sporting Goods Association in 1899 and started leasing the Detroit Light Guard Armory for shows. During the first years, autos were only a small part of the featured event. In 1900 Metzger is credited with organizing the first recognized automobile show in New York City which was also sponsored by the National Association of Automobile Manufacturers and the Automobile Club of America. The main purpose of that event was to drum up dealers — who could sign licenses at the event. The public was not invited to attend.

However, by 1902 the annual event held in Detroit is credited by the Michigan Historical Society as the first automobile show in Detroit. And who are we to quibble?

Driving automobiles were still an adventure. There were few roads beyond the city limits. Nor were there signs, garages, gas stations, or road maps. In order to venture any distance, vehicles usually formed “packs” for touring. To improve conditions for automobile driving and sales, William Metger went on to create the Automobile Club of Michigan in 1902.