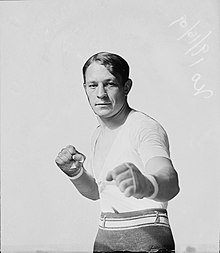 On Oct. 15, 1910, Stanley Ketchel’s brilliant and flamboyant life was snuffed out on a farm near Conway, Mo.

His legend was not.

In 2001, when HBO televised a Floyd Mayweather championship fight from Van Andel Arena for the first time, the first place the star-studded announcing crew wanted to visit was Ketchel’s final resting place at Holy Cross Cemetery on Walker Avenue NW.

In 2000, days before Mike Tyson fought his only professional bout in Michigan, he was asked if he had any personal plans while in Detroit. He said his only plan was to visit Grand Rapids and pay respects to Ketchel.

Ketchel crammed a lot of life into 24 years. Historians remember him as one of the finest middleweight champions ever, a pure fighter with few boxing skills who won by the urgency of his fury and weight of his fists, and as a man with enough gall to challenge the great heavyweight champion of that era, Jack Johnson — and perhaps even double-cross him.

“Stanley Ketchel was one of the all-time greats,” said historian and author Bert Randolph Sugar. “At the turn of the last century, he was probably the equal of every fighter of that era, except Jack Johnson, and probably the equal of all athletes in popularity, except for (baseball players) Ty Cobb and Honus Wagner.

The Ketchel legend does.

In 1954, Ketchel was part of the original class inducted into the International Boxing Hall of Fame. He also is in the Michigan Sports Hall of Fame.

The Ring magazine ranks Ketchel as the eighth-best middleweight in history, behind some of the greatest fighters ever, including Sugar Ray Robinson, Carlos Monzon and Marvelous Marvin Hagler.

In a recent book, Bert Randoph Sugar ranks Ketchel even higher, placing him 20th all-time among all fighters, regardless of weight division.

“He was basically an animal in the ring, and with his teeth bared, and his eyes a little cockeyed, he came at you and kept coming at you,” Sugar said. “For whatever reason, in the ring, he was the quintessential killer. He just kept coming. He was one of those throwback, Neanderthal-type fighters who would throw a punch and be halfway back to the dressing room before his opponent hit the canvas, because he was so confident in his power.”

In his hometown, the legend is fading.

The only tangible memorial to Ketchel here is a historical marker near the intersection of Bridge Street and Stocking Avenue.   However, more recently a Grand Rapids Community Legends status has been erected.