Clokey was born Arthur Farrington in Detroit in October 1921 and grew up making mud figures on his grandparents’ Michigan farm. “He always had this in him,” his son, Joseph, recalled Friday.

At age 8, Clokey’s life took a tragic turn when his father was killed in a car accident soon after his parents divorced. The unusual shape of Gumby’s head would eventually be modeled after one of the few surviving photos of Clokey’s father, which shows him with a large wave of hair protruding from the right side of his head.

After moving to California, Clokey was abandoned by his mother and her new husband and lived in a halfway house near Hollywood until age 11, when he was adopted by a classical music composer Joseph W. Clokey. The renowned music teacher at Pomona College taught him to draw, paint and shoot film and took him on journeys to Mexico and Canada.

Art Clokey attended the Webb School in Claremont, whose annual fossil hunting expeditions also inspired a taste for adventure that stayed with him. “That’s why ‘The Adventures of Gumby’ were so adventurous,” his son said.

Clokey served in World War II, conducting photo reconnaissance over North Africa and France. Back in Hartford, Conn., after the war, he was studying to be an Episcopal minister when he met Ruth Parkander, the daughter of a minister. The two married and moved to California to pursue their true passion: filmmaking.

During the day, the Clokeys taught at the Harvard School for Boys in Studio City, now Harvard-Westlake. At night, Art Clokey studied film at USC under Slavko Vorkapich, a pioneer of modern montage techniques.

Clokey’s 1953 experimental film, “Gumbasia,” used stop-motion clay animation set to a lively jazz tempo. It became the inspiration for the subsequent Gumby TV show when Sam Engel, the president of 20th Century Fox and father of one of Clokey’s students, saw the film and asked Clokey to produce a children’s television show based on the idea.

Today, Gumby is a cultural icon recognized around the world. It has more than 134,000 fans on Facebook. 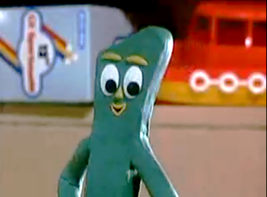 In the 1960s, Clokey and his wife Ruth created and produced the Christian TV series “Davey and Goliath”,  funded by the Lutheran Church in America,  so they they were finally able to make use of their religious education.

Gumby’s ability to enchant generations of children and adults had a mystical quality to it, said his son, and reflected his father’s spiritual quest. In the 1970s, Clokey studied Zen Buddhism, traveled to India to study with gurus and experimented with LSD and other drugs, though all of that came long after the creation of Gumby, his son said.