Numbed by temperatures that dipped to 10 below zero, firemen from five cities joined in the fight to bring the stubborn fire under control.

Giving firemen a helping hand, as water ran down the streets, were employees of the public service department. They brought snow removal equipment into action, pushing the slush away and keeping drains open. In some places on Walnut St. the water was six to eight inches deep.

Lost on the mezzanine floor were valuable state records, some of them dating back to the start of state government. Valuable papers were stored there by almost every department with offices in the state office building. …

About 9 o’clock Thursday night, at the request of Gov. Soapy Williams, Fire Marshal Renner summoned department heads and supervisors back to the building to carry out any important papers that could be rescued. By this time, access to the building was limited to the first floors by smoke that rolled through the structure to the basement.

Fearing that he would be drafted to fight in Korea, a state employee set a fire in the Lewis Cass Building in Lansing. He went to prison instead, but much of the state library and archival collection was destroyed.

After the fire was put out, state workers turned to the task of trying to save items damaged by the fire.  See Book Rescuers in 1951.  A small collection of photos from the LIFE Archives, taken by Thomas Mcavoy, show the sheer awesomeness of librarians at the time trying to dry out state library books damaged by efforts to fight the Lewis Cass State Office Building fire. 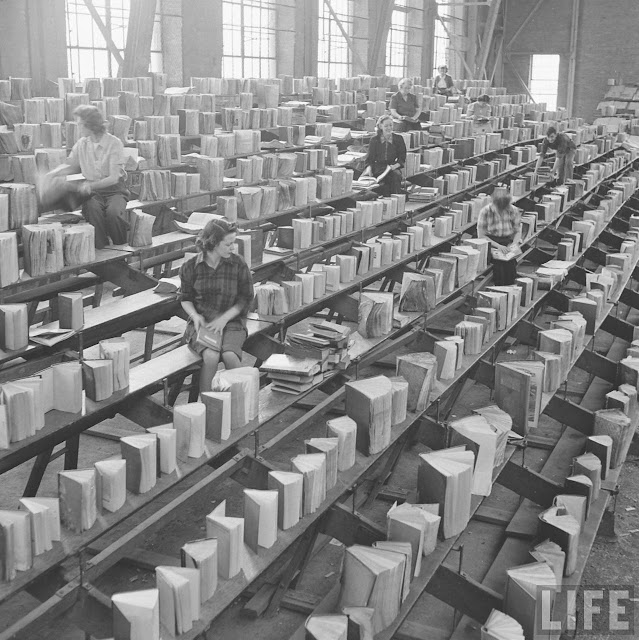 Pictures of the Book Rescuers 1951, Vintage Everyday, April 25, 2015.  A small collection of photos from the LIFE Archives, taken by Thomas Mcavoy, show the sheer awesomeness of librarians. Pictured in 1951 drying out state library books damaged by fighting the Lewis Cass State Office Building fire in Lansing, Michigan; it was quite the undertaking.

Life Magazine, March 19, 1951 :  article starts on page 59.  The fire was started by a 19 year-old Naval Reservist who feared being sent to war in Korea and thought that “a little fire” would gain him the probationary status he coveted. The 1951 disaster destroyed much State property, including some government records. The fire proved an object lesson on the importance of record keeping. Many documents were unrecoverable and proper inventories didn’t exist.