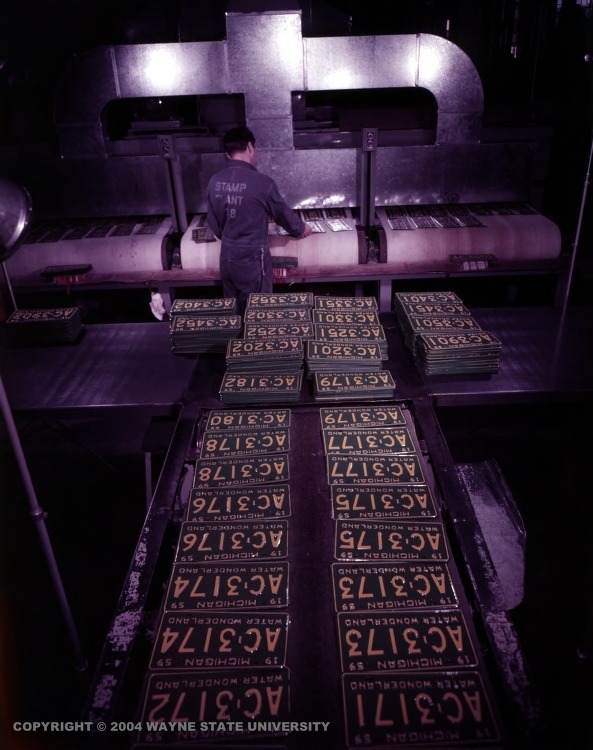 State prisoners were a source of cheap labor to private industry for nearly 60 years in Michigan.

Under a contract labor system which began in 1843, entrepreneurs paid the prison at Jackson sums ranging from 34 cents to 56 cents a day for each prisoner who worked for them. Besides the manpower, the prison supplied the building for the industry if it was to be run behind the walls. The private manufacturing brought in the equipment and supplies.

In this system, prisoners made harnesses and other farm equipment, woolen and cotton goods, carpeting, farm tools, saddle trees and trimmings, steam engines and boilers, barrels and copper ware. Other contracts were established for the manufacturing of shoes and laundry products.

The prisoners themselves received none of the money they worked for; the jobs were simply another part of their drab and grim existence as transgressors in that period. A total of 517 of the 625 prisoners at Jackson were employed under a contract in 1869. By 1900, the practice was nearly nonexistent.

In 1922, the state began to operate its own factories but continued to sell the products on the open market.

In 1935, Congress passed the Hawes-Cooper Bill, prohibiting the shipment of prison-made goods in interstate commerce. In 1937, the Michigan Legislature adopted a bill which limited the sale of prison products to state institutions and Departments and other wholly tax-supported agencies. It was believed at the time that the laws were designed mostly in reaction to Depression conditions to protect free industry and labor.

One industry long associated with prisons has been the production of license plates. The first plates, produced before 1910, were made of leather and used metal house numbers.

It was in 1918 that the prison near Jackson first began producing automobile license plates along with street and road signs.

In 1980, the state Correctional Industries Act was amended to allow MSI to sell its products to nonprofit organizations, to governmental institutions in other states and to the federal government. It allows Michigan agencies, offices and departments to buy goods from Industries if they are comparable in price and quality to those produced elsewhere and can be supplied in a reasonable time period.

The amendment let MSI set prices which provide for a margin in direct and indirect costs. It set up a five-year phase-in that gradually increased the amount of self-sufficiency. MSI became self-supporting in 1985.

Self-sufficiency saves the state the cost of civilian wages, salaries and other costs which were paid out of the Department’s budget in the past, and it allows Industries to expand its operations in order to employ more prisoners.