Terry McDermott, the 23-year-old bashful barber from Essexville, Bay County, Michigan, shocked the world today by setting an Olympic speed record in the 500 meter speed skating competition at the 1964 Winter Olympics in Innsbruck, Austria, and winning the only gold medal by a U.S. athelete at the event. 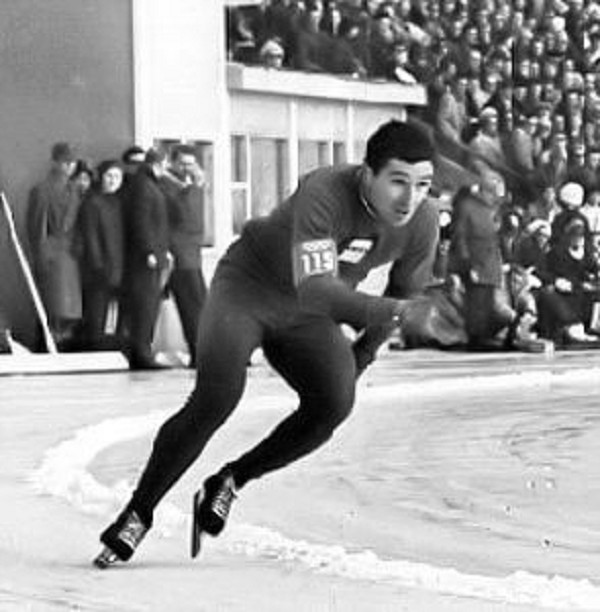 McDermott flashes around the frozen oval at Innsbruck to shock the world in 1964.

As the folks in Bay City scurried to plan a hero’s welcome, his new wife of 4 months was sent to New York City so they could enjoy a short honeymoon. While there, he was invited onto What’s My Line and the Ed Sullivan show where he and his wife met the Beatles, as luck would have it, on their first trip to the United States.

Less than 48 hours after the Ed Sullivan show, McDermott returned home to a star-spangled celebration with a 200-car motorcade and a crowd of more than 50,000 cheering and waving signs. The parade route ended at his home — “I still remember Governor George Romney coming and sitting in our tiny two-bedroom place,” Virginia says — where they’d painted the Olympic rings on the street.

After that, it was back to the barbershop for McDermott — “We had bills to pay,” he said — and Chair No. 3 became a very popular spot. For $1.75 a head, you got a trim from an Olympic gold medalist, “so we had a bunch of children getting their first haircuts,” he chuckled.

McDermott would come out of skating retirement for another try in the 1968 Winter Olympics in Grenoble, France, winning a silver medal this time.

McDermott got a bad break with soft ice in the 1968 Olympics at Grenoble, France, finishing second at 40.5 seconds. But winner Erhard Keller of West Germany admitted Terry would have won had he been in an earlier heat when the ice was hard. He would later spend many years helping U.S. skaters prepare for subsequent Olympic events.