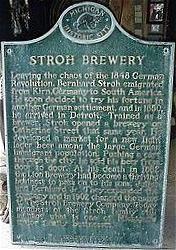 Historical marker text : Leaving the chaos of the 1848 German Revolution, Bernhard Stroh emigrated from Kirn, Germany, to South America. He soon decided to try his fortune in another German settlement, and in 1850 he arrived in Detroit. Trained as a brewer, Stroh opened a brewery on Catherine Street that same year. He developed a market for a new light lager beer among the larger German immigrant population. Pushing a cart through the city, he sold his beer from door to door. At his death in 1882 the Lion Brewery had become a thriving business to pass on to his sons, Julius and Bernhard Jr. They expanded the company and in 1902 changed the name to the Stroh Brewery Company. Today members of the Stroh family still manage what is one of Michigan’s major family businesses.  [Believe it or not but the The Stroh marker was offered for sale on eBay in 2000. After intervention by the Attorney General, the marker was returned to Michigan from Florida and is now in Lansing.]

Beer was brewed in Detroit as early as 1836. By the eve of the Civil War there were around 400 breweries in Michigan’s largest city. One of these was operated by Bernhard Stroh, who began brewing beer in Detroit in the 1850s. By the 1880s, Stroh was Detroit’s biggest brewery. In the years following World War II, Stroh fought with Goebel and Pfeiffer for dominance in the city. By 1982, Stroh was the nation’s third largest brewery, but Stroh’s acquisition of Schlitz led to the closing of the Detroit plant.