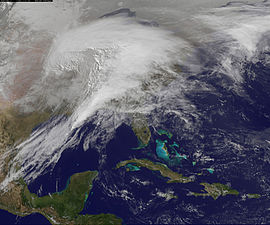 In what the National Weather Service called “a top 10 storm” for Michigan, Groundhog Day blizzard conditions brought about a foot of snow to mid-Michigan, along with high winds and frigid temperatures, creating dangerous wind chills and hazardous travel conditions. As a result, MSU suspended classes on February 2, 2011.  However the university’s critical functions were maintained and dining halls remained open, while electronic services and business operations were supported remotely. Classes and normal operations resumed February 3.

The university had only closed or canceled classes four other times:
• January 26-27, 1967: After a snowfall of 26 inches, the university closed for the first time in its history.
• April 3, 1975: A freak snowstorm dumped 15 inches of wet snow that came down so quickly, roads and walks were impassable. As this was in April, many people weren’t prepared to deal with snow. The snowfall subsequently led to one of the biggest floods in mid-Michigan history two weeks later.
• January 26-27, 1978: A 24-inch snowfall closed the university for two days.
• January 19, 1994: Classes were suspended due to cold weather (18 degrees below zero; wind chill, 51 degrees below zero), the second coldest temperature recorded this century. The university remained open.

Addendum : Top Six MSU Closures Due to Snow, Cold, or a Combination

Number 2.  A freak snowstorm on April 3, 1975 dumped 15 inches of wet snow, making roads and sidewalks impassable. Many people weren’t prepared for that kind of weather so late in the spring. It later led to one of the biggest floods in mid-Michigan history about 2 weeks later.

Number 3. The blizzard of ’78 also forced the university to suspend classes, after 24 inches of snow closed MSU for 2 days on January 26 & 27.

Number 5.  On February 2, 2011, classes were suspended for blizzard conditions that brought nearly a foot of snow, high winds and frigid temperatures. University critical functions were maintained, while electronic services and business operations were done remotely. The National Weather Service called this a “top 10 storm” for Michigan.

Number 6.  January 6-7, 2014.  After nearly two days of suspended operations, classes at MSU are expected to resume at 5pm Tuesday, marking the sixth time in university history it had to close to due to weather.

Eve Adoulos and Hillary Gatlin, “A History of Snow Days at MSU”, Tales from the Archives: Volume One, Campus and Traditions, 1917.