It is hard to grow up in Michigan and not have at least seen or heard the Detroit Lions playing on Thanksgiving afternoon. Detroit has played in every Thanksgiving game since 1934. Like turkey, it’s a tradition. But why Detroit?

Detroit entered the National Football League in 1934.  A local radio executive, George A. Richards, had purchased the Portsmouth (Ohio) Spartans and moved them to Detroit. The Spartans were members of the NFL from 1930 to 1933.

Richards knew it was risky to schedule a game on Thanksgiving, but the new team needed to find it’s place alongside the Detroit Tigers (1901) and Redwings (1926).  By playing on Thanksgiving, the team had the nation’s attention. 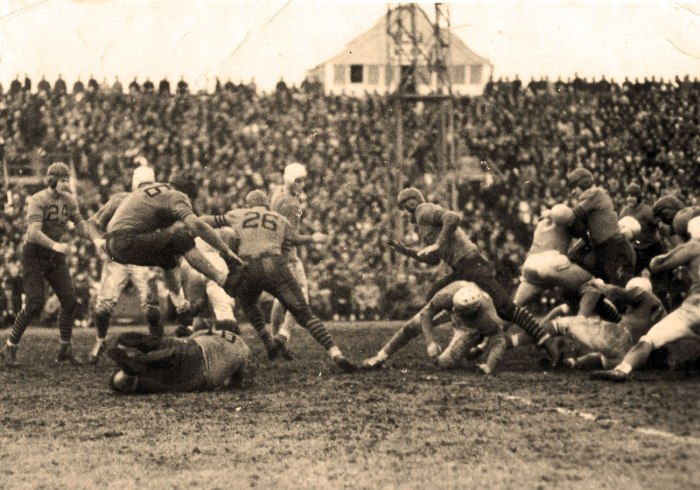 On somewhat short notice, the Lions played the Chicago Bears at the University of Detroit stadium.  26,000 tickets were sold two weeks prior to the game.  Despite the fact that the Bears won the Turkey Day clash 19-16, the experience was a success.

In 1935, Richards signed up for the holiday game again.  This time, Detroit beat Chicago in a game that propelled them to win the 1935 NFL Championship — in their second year!  (The Tigers also won the World Series that year and the Redwings the Stanley Cup in 1936. Take that, Great Depression!).  The enthusiasm and success of the new organization’s Thanksgiving Day game sealed the tradition for Detroit, and that tradition has been in place ever since.

In the late 1800’s, football programs would get together on thanksgiving day to toss the old pigskin around for the simplest of reasons, it was a holiday and everyone had the day off. The Michigan Wolverines and Chicago Maroons started a thanksgiving day tradition by playing each other on turkey day multiple times until the early 1900’s. From there, Detroit took over the day.

The earliest recorded NFL football game on Thanksgiving day was between the Canton Bulldogs and the Akron Pros in 1920. Just a short while later on that same day, the Detroit Heralds traveled to Dayton to take on the Triangles. Interesting names from an interesting time. What’s also interesting is that the Heralds weren’t technically a pro team.

The Heralds were more of a club if anything. The results of the University of Detroit not fielding a squad. In my studies I found that despite the early records, this was not the Heralds first thanksgiving day game. They faced the Canton Bulldogs three years earlier in a losing effort as part of the Ohio league. While it wasn’t their first turkey game in 1920, it was however their last. The Heralds became defunct later that year. At least the name did.

The early days of the NFL began that same year. Only at that time the league was called the American Professional Football Association. In 1921 the Heralds merged with the Buffalo All-Americans and became the Detroit Tigers. That’s right I said the Detroit Tigers. There was no association between the football team and the baseball team other than the former being named after the later.

The Tigers played one thanksgiving day game. coincidentally this was the first Detroit team to win a game on thanksgiving day as they defeated the Chicago Staleys in a shootout 7-6. After this win the team began to fall apart and lose its roster due to non-payment. The franchise shut down after the season. beginning a four year drought for Detroit football fans.

In 1925 the Detroit Panthers were formed by Jimmy Conzelman. Interesting enough, Conzelman was the team’s owner, head coach and starting quarterback. That’s the way things went back then. Like the Heralds, the Panthers did not last long in what was now being called the NFL. They were lucky enough to become the first Detroit football team to host a Thanksgiving day game. In fact they hosted the first two. Unfortunately both were losses and the team deactivated in 1926.

In 1928 the Detroit Wolverines became the final Detroit football team not named the Lions to host a Thanksgiving day game. The Wolverines are interesting story about a team of players that had played for the Cleveland Bulldogs the year before. The team was purchased and immediately deactivated. With no place to go, some of the remaining players got together and formed the Detroit Panthers. They played one season in Detroit which included a Thanksgiving day win over the vaunted Dayton Triangles 33-0. The team would be purchased the next year by the New York Giants. A move that absolved most of the Wolverines best players, most notably their starting quarterback.

Five years later the rest is all history. The Lions played their first game on Thanksgiving against the Chicago Bears and never looked back. Many question why the Lions should continue to host this game after years of futility. The answer is simple. This isn’t a Lions tradition, this is a Detroit tradition. 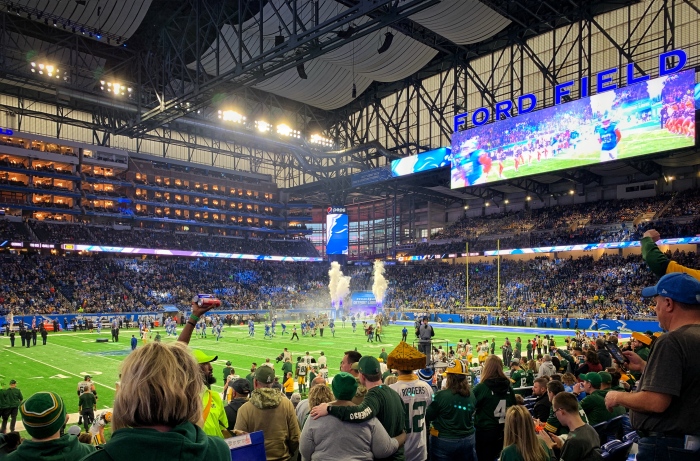 Ford Field, Home of the Lions

“Why do the Detroit Lions always play on Thanksgiving?“, YahooSports, November 21, 2012.