Video Note: Commentator Mo Rocca traveled to Hamtramck for CBS Sunday Morning to get this report on Pazcki Day.

It may be Fat Tuesday or Mardi Gras in New Orleans, but in Michigan its called Pazcki Day.  Paczki Day Music.

Be sure to wear your stretchy pants so you can indulge in those plump, fruity, calorie- and fat-laden paczki! 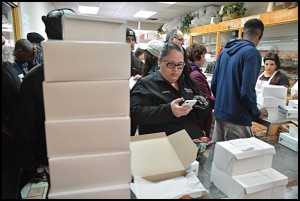 Local bakeries will be jammed with paczki lovers this coming Tuesday. The wait can sometimes stretch for over two hours. You can beat the rush on Paczki Day by picking up your dozen on Monday. Source : Paczki Day brings out the Mardi Gras spirit in Hamtramck from the Hamtramck Review.

Here are 10 things you should know about paczki:

2. “Paczki” is pronounced POONCH-key and is plural; one pastry is a paczek (POON-check).

3. The paczki is thought of as a way to use up fatty ingredients like lard and butter, as well as sugar, eggs and fruit before Lenten fasting begins.

4. Don’t call paczki jelly doughnuts. They have a much richer flavor because the yeasty dough is made with more eggs. They are also bigger and plumper; the shape is more like a sphere.

5. In Poland, the last Thursday before Lent begins is called Fat Thursday. So the splurge day would not be today, it would have been Feb. 23 this year.

6. Paczki in Poland “are much smaller, about half the size. There’s also a lot less filling, only about a teaspoonful,” according to Bittner.

7. A small amount of grain alcohol is added to paczki dough before cooking. As the alcohol evaporates, it prevents the absorption of oil deep into the dough so the pastry is not greasy.

8. Filling flavors range from a slew of jams, including the traditional rosehip jam, to custard and more. Some bakeries make up their own specialty fillings each year. Some paczki are dusted with powdered sugar, others are covered with icing or glaze, some are drizzled with chocolate. Some have bits of dried orange zest on them.

9. Paczki prices vary widely, depending on the source.

10. Calorie and fat? Brace yourself. Depending on the size, paczki can have as many as 400 calories and more than 20 grams of fat.

Pączki (Polish: pączki) are traditional Polish doughnuts. Pączki is the plural form of the word pączek  in Polish, but many English speakers use paczki as singular and paczkis as plural. A pączek is a deep-fried piece of dough shaped into a flattened sphere and filled with Plums or other sweet filling. A traditional filling is marmalade made from fried rose buds. Fresh paczki are usually covered with powdered sugar, icing or bits of fried orange zest. Pączki have been known in Poland at least since the Middle Ages. Jędrzej Kitowicz has described that during the reign of the August III under influence of French cooks who came to Poland at that time, pączki dough baked in Poland has been improved, so that pączki became lighter, spongier, and more resilient Pączki Day Traditionally, the reason for making paczki has been to use up all the lard, sugar and fruit in the house, which are forbidden during Lent. They are eaten especially on Fat Thursday, the last Thursday before Lent (Polish: Tłusty czwartek, not to be confused with Fat Tuesday or Shrove Tuesday). In Chicago, Detroit, Milwaukee, and South Bend Paczki Day is more commonly celebrated on Fat Tuesday instead of Fat Thursday.

Although Bismarcks and Jelly-filled doughnuts are the more commonly used names for the pastry in the United States, Polish immigrants have popularized this type of preserve-filled doughnut in some parts of the country, especially in Hamtramck, an enclave of Detroit. Hamtramck is known to be the only U.S. city to organize an annual Paczki-Day (Fat Tuesday) Parade, and lines can be seen up to 24 hours before the deep-fried delights go on sale at the numerous local bakeries. Many bars in town open early in the morning, and provide free entertainment, a party atmosphere, and even Paczki-clad mascots. The Paczki-Day celebration in this town is even larger than many areas have for St. Patrick’s Day. Here, prunes are considered the traditional filling, but many others are used as well, including lemon, strawberry, Bavarian cream, blueberry, custard, raspberry, and rarely apple. Due to French influence, paczki are eaten on Mardi Gras (Fat Tuesday) rather than on Fat Thursday. In the large Polish community of Chicago, and other large cities across the Midwest, paczki day is also celebrated annually by immigrants and locals alike. Home-made paczki glazed with fondant. Home-made paczki glazed with fondant. Another cultural phenomenon is the emergence of the “Pączki Challenge.” A eating contest in which individuals attempt to race from one side of a room (non – standard) while eating as much or as many Pączki as they can before reaching the other side. The person to reach first and having eaten the most Pączkis wins. Typically a ratio of 1 Pączki for every 10 steps is considered competitive.

Need to track when the next Paczki Day falls?

Paczki Day, Shrove Tuesday, or Fat Tuesday  is exactly 47 days before Easter Sunday, a moveable feast based on the cycles of the moon. The date can be anywhere between 3 February and 9 March inclusive.  Here’s a table provide by wikipedia: