On July 26, 1701, just two days after Cadillac’s arrival, construction began on St. Anne’s church in Detroit, and the first Mass was celebrated. Now located near the Ambassador Bridge, St. Anne’s is the longest continuously operating church in Michigan.

During June and July of 1863, heavy rains caused the Grand River to rise nearly twenty inches. Lumbermen took advantage of the high water to bring their logs down river where they were held by booms located above the rapids. But the logs broke loose and 150 million board feet of timber went tumbling down the river toward Lake Michigan. This event created one of the biggest jams in US logging history. Logs piled up and created a jam thirty-feet deep and seven-miles long.

For four days and nights, brave loggers worked tirelessly under treacherous conditions. One wrong step and the worst could be anticipated. The unstable mass of logs constantly creaked and heaved under the immense pressure, at times causing single logs to suddenly break loose and shoot straight up into the air.  John Walsh, a one-armed marine engineer, led an emergency crew driving piles in the main river to channel to block the logs from proceeding haphazardly down the river to sink in Lake Michigan and also creating a new thirty-five foot channel so the logs could progress orderly to lumber mills for processing. This allowed workers to untangle and guide the timber to its downriver destination, but not before two railroad bridges above Fulton Street and Wealthy Street were completely destroyed by the pressure of the jam. 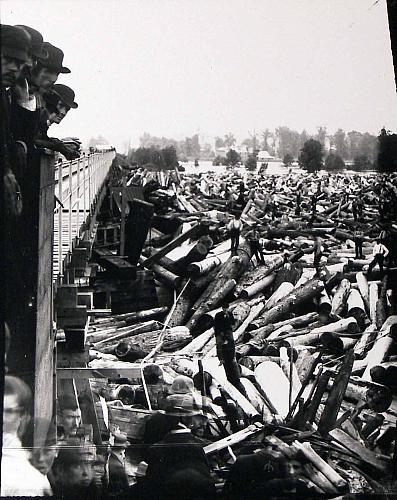 His employers gave Captain Walsh a gold watch for his bravery and his ability to work fast and well enough to build the dam in time. By saving the timbers, he saved the company many thousands of dollars. John Walsh was a long-term employee of the White & Friant Lumber Company.

On July 26, 1905 the Keewenaw Peninsula was shaken by an earthquake.  It was determined to be a VIII on the Mercalli Scale, which translates on the Richter Scale as being between 5.0-5.9.  Chimneys were toppled and plate glass windows were broken in Calumet, and the shocks from the earthquake were sensed as far north as Copper Harbor (50 kilometers) and as far east as Marquette (105 kilometers).  (Hobbs, 1911).  No wonder that the copper mines refused to descend into the mines for the night shift!

From 1902 to 1909, more than 20 earthquakes rattled the UP.  Discover more fascinating accounts and events in the book “Forgotten Tales of Michigan’s Upper Peninsula” by Lisa Thiel, available via interlibrary loan from the Library of Michigan. 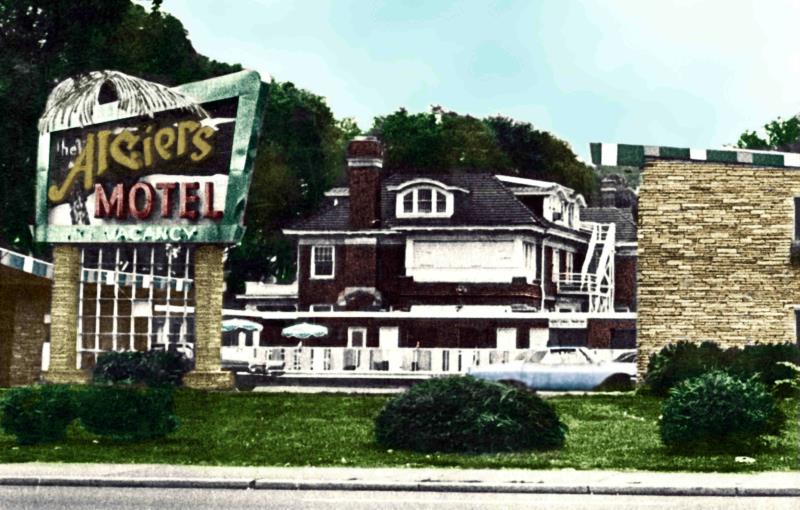 The Algiers Motel as seen from Woodward Avenue with the three story annex in the background.

Three unarmed black teens were murdered/found dead on the floor inside a transient motel annex north of downtown Detroit on July 26, 1967, several days after racial rioting had overwhelmed the city.

The incident would later featured in a best selling book by John Hersey, “The Algiers Motel Incident,” published in 1968  and later dramatized in the  movie Detroit in 2017.

When the riot started a number of individuals, desperate to get off the street and thus out of harms way, took up residence in the annex of the Algiers. All total there were nine people, seven black males and two white females. As the riotous night of July 25 turned into the morning of the 26th, 17-year old Carl Cooper was out on the back porch with friends firing a starters pistol loaded with blanks into the air, a foolish thing to do at the height of a riot but boys will be boys and subsequently they thought nothing of it.

Unbeknown to the boys, their merrymaking had caught the attention of the National Guardsmen who had secured a large building 200 ft away. Upon hearing the shots, the Guardsmen believed they were the target of a sniper from the direction of Virginia Park. The Guardsmen commander, Warrant Officer Theodore Thomas, telephoned the Detroit police dispatcher who may have over emphasized the situation, “Army under heavy fire at Woodward and Euclid,” echoed through Detroit police cruisers. Thomas was amazed to see Detroit police show up immediately, with additional Guardsmen and state police in tow.

One of the suspects, Roderick Davis, was pulled off the line and brought into the room directly behind the line up. The door closed behind them. The officer instructed Davis to spread eagle on the floor and remain quiet and then shot into the floor. Back out in the hallway the remaining suspects believed a shooting had occurred. It was actually a death game, an attempt to extract a confession regarding who the sniper was by instilling additional fear. Unfortunately either no one still in the line-up had any knowledge of Carl Cooper firing off the starter pistol earlier or were too scared to mention it, thus no confessions were forthcoming and so the game continued.

Another suspect, Michael Clark, was brought into another room, spread eagle on the floor and another errant shot fired into the floor. Still no confessions. This time it would be Aubrey Pollard’s turn. Pollard was brought into the back room where the dead or dying Fred Temple still lay. The possibility exists that this officer may himself have been unaware that this was only a game to extract a confession. Pollard was shot shortly after he entered the room. According to the officer, the terrified Pollard reached for his shot gun twice believing he was going to be shot, presumably like the others, and only then did the officer fire.

It was now apparent that the death game that had started simply as a scare tactic to extract confessions had now gotten completely out of hand. The Guardsmen, following the lead of the state police who had left earlier after sensing the gravity of the situation, quickly left the building, telling the police that this was “strictly their business.” They were followed in short order by the remaining Detroit police who left to address reports of more shootings nearby, leaving the terrified civilians behind.

A week after the riot it was clear that Detroit police were complicit in the killings. Three officers and a private guard were arraigned on a variety of charges. Owing to the publicity generated by the best selling book by John Hersey, “The Algiers Motel Incident,” published in 1968, the defense asked for the trials to be moved out of Detroit. Their petitions were granted. Trials were held in Lansing, Ann Arbor and Mason. In the end all were acquitted and the rage in black Detroit ratcheted up even further.

The police, it appeared, had initially hoped the killings would be lost in the fog of war or be viewed as the work of a rogue and elusive sniper. But the witnesses and evidence they left behind indicated otherwise. All the autopsies indicated the youths were killed inside the house at close range by a shotgun using double “O” buckshot, the same kind used by the Detroit police department for riot control.

The riot’s four-day lifespan reaped a death count of 43 people, in addition to more than 1,100 injuries and 7,000 arrests.

“Detroit Police killed their sons at the Algiers Motel. No one ever said sorry.”, Bridge, July 25, 2017.

On July 26, 2015, John Smoltz of Lansing was inducted into the Baseball Hall of Fame. He was voted in on the first ballot by the Baseball Writers Association of America on January 6, 2015.

On July 27, 1934, the newly created state Old Age Assistance Bureau mailed the first ever old-age pension checks, ranging from $5 to $12, to 100 applicants in nine counties.

The upper tail of an earthquake centering in Kentucky hit Michigan on July 27, 1980. Automobiles in Allegan, Coldwater, Flint, Hastings, and Mount Pleasant rocked noticeably, while dishes broke in Detroit. Also, during the fifth inning of a baseball game, the quake swayed Tiger Stadium’s upper levels.

During the 1967 riot, the Free Press borrows an armored personnel carrier (sans gun) from Chrysler Corp., which builds them in Warren. The vehicle is used to protect reporters in riot areas. But one morning, several staffers drive the APC to the Detroit News building and demand that the News staffers surrender.