On this day, Minnesota custodian Oscar Munson found Michigan’s discarded water jug in the visitors’ locker room. The discovery came after a bitter contest in which Minnesota dominated the Wolverines in almost every statistical category except one: points. The game ended in a tie after Minnesota scored a touchdown with two minutes left on the clock. Exuberant fans stormed the field, forcing an early end to the game, which many football pundits considered a major upset over the Wolverines. It was Fielding Yost’s first “defeat” as head coach at Michigan. It was also the first live “broadcast” of a college football game.

Another interesting sidelight of the game: Long before Hill Auditorium hosted a signing day extravaganza, the venerable hall was regularly filled with U-M fans for away football games, following their team’s fates on an elaborate “gridgraph.” Before there was radio, the first “broadcasts” of away games were the work of The Michigan Daily, which received telegraphic updates on the game and posted them on a scoreboard on campus. For the 1903 Minnesota game (the “Brown Jug game”), U-M student David Mattice sat perched in a telephone booth atop a 40-foot pole at Northrup Field. He called the action over the telephone wire to a bank of 10 phones in University Hall Auditorium where students, each in turn, took in as much of Mattice’s commentary as they could repeat and relayed it to the crowd with a megaphone. The progress of the ball was marked on a large gridiron diagram. With the development of loudspeakers and amplifiers, the “broadcaster’s” voice could be sent directly to the crowd, and evermore elaborate gridgraphs were devised to chart the game. The model pictured was purchased by the Alumni Association in about 1921. The first radio broadcasts of U-M football came in 1924, but the gridgraph at Hill continued through the 1929 season. The Alumni Association and The Michigan Daily combined to sponsor gridgraphs at the Michigan Union for some games through 1933.

“The First “Broadcast” of a UM Football Game”

The First 150 Years of Michigan Athletics. For decades in Detroit, Halloween Eve was synonymous with fire.

Photographers from around the globe flocked to the city to witness what became known as Devil’s Night, the notorious tradition of setting fire to houses, buildings, carsm and dumpsters.

Between 1979 and 2010, more than 100 fires broke out each year. The worst year was 1984, when firefighters responded to more than 800 blazes that covered the entire city in an eerie, smoky haze on Halloween morning.

On October 31, 1984, a combined 810 structure fires were reported in the city of Detroit for the three-day period between Oct. 29-31, marking the highest number of “Devil’s Night” blazes in the city’s history, according to the Detroit Firefighters Association. 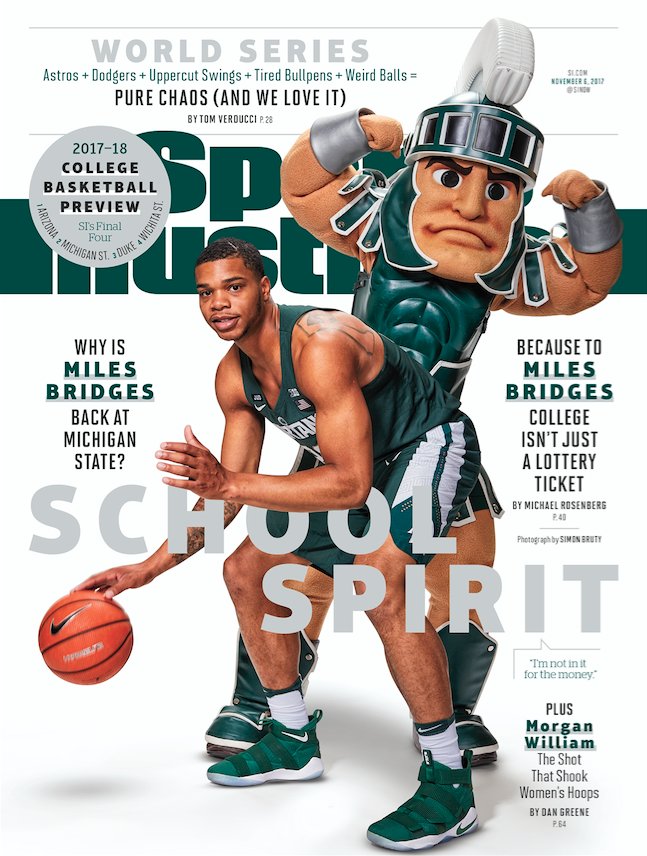 Miles Bridges, the Michigan State star sophomore, and Sparty are featured on the cover of this week’s Sports Illustrated. under a banner called School Spirit.”   It should bring a smile to anyone who bleeds Green and White!

From gender-bending costumes to gastrointestinal surprises, the history of Detroit offers some unusual practices revolving around Halloween.

Halloween wasn’t really celebrated in Detroit until late in the 19th century. An influx of Scottish and Irish immigrants in the 1840s brought the “witchier” tradition to the region, but the holiday wasn’t mentioned on paper until the 1860s.

Although there aren’t any stories that are unique to Detroiters, Amy Elliott Bragg said that a few of the stories were very funny. There were a few ways with which you would celebrate Halloween: if you were a high society type, it was a great excuse to have a huge party. Upscale hotels would have Halloween parties – the Griswold, the Detroit Athletic Club, the Boat Club – and they would decorate in a harvest themed motif. People would congregate at Grand Circus Park and Campus Martius for an unofficial parade of costumes and Halloween revelry.

In an interview with Michigan Radio in 2013, local historian Bill Loomis said that there was a boom in popularity with people wanting to communicate with the dead from post-Civil War Era to the 1920s. “The Civil War saw a huge rise in the interest in that – in séances, in ouija boards and telepathy, and all kinds of things like that. Even hypnotism came around, spirit photography was real popular.

Another – considerably less safe – tradition was to bake random inedible objects into your food and serve it to unsuspecting people. “You would take a penny, a button, a key, and the fourth object varied. Sometimes it was a shell, sometimes it was a little heart charm, and you would bake it into a cake or put them in a bowl of mashed potatoes, and then you would serve the cake or potatoes,” Bragg said. “Whoever got the penny, it was said that that person would receive a fortune. Whoever got the key got the key to success. The heart charm would, of course, be true love.”  Considering that biting into your food and finding inedible objects is already bad, Elliott Bragg says that the button was the worst object to find in your food. “I think the button was like, ‘You’re out of luck.’”

Yet another way to celebrate was for adults to allow “roving gangs of children” to run amok in the streets. These gangs often consisted of boys who would destroy property by uprooting people’s cabbage plants, breaking off the stalks, and throwing them at houses. They would also break off people’s yard gates and set large fires in the middle of the street. “People kind of wrote off this boy gang terrorism as, like, ‘Well you have to let the animal spirits get out once in awhile,” said Elliott Bragg.

“And sometimes, these roving gangs of children would interrupt high society parties. So, every once in awhile you would see a report where it said ‘a gang of boys busted into the Roosevelt Hotel and ran through the lobby!’ They would, like, knock over chairs, and pull off table cloths and one year they broke into a restaurant and stole a bunch of toothpicks,” Elliott Bragg said. “People were really afraid of these roving gangs of children.”

Gender-bending costumes played an integral part of terrorizing the neighborhood. “Little girls would dress up as little boys,” said Elliott Bragg. “They would parade in the streets with the freedom that they could experience as a little girl only when they were dressed up as a boy. And the boys would sometimes put on girls clothes while they were running around and breaking things.”

Even though Halloween was overwhelmingly a playful holiday, some children in these roving gangs did end up being seriously hurt or killed from being too rambunctious. As Detroit transitioned from the 1930s to the 1940s, Elliott Bragg said the mischief trickled to a stop with changing societal norms. The trick-or-treating that we know today started around the 1950s.

And more recently, we have parents checking their children’s candy to make sure it hasn’t been tampered with or poisoned.

More About the History of Halloween in General

Straddling the line between fall and winter, plenty and paucity, life and death, Halloween is a time of celebration and superstition. It is thought to have originated with the ancient Celtic festival of Samhain, when people would light bonfires and wear costumes to ward off roaming ghosts. In the eighth century, Pope Gregory III designated November 1 as a time to honor all saints and martyrs; the holiday, All Saints’ Day, incorporated some of the traditions of Samhain. The evening before was known as All Hallows’ Eve and later Halloween. Over time, Halloween evolved into a secular, community-based event characterized by child-friendly activities such as trick-or-treating. In a number of countries around the world, as the days grow shorter and the nights get colder, people continue to usher in the winter season with gatherings, costumes and sweet treats.

For more information and a collection of video clips explaining Halloween, visit the History Channel website.

While activity outside was minimal, with tailgating in nearby parking lots prohibited and fans told to stay home, only a few hundred folks were allowed into Michigan Stadium for Saturday’s rivalry game between Michigan and Michigan State.

The announced crowd of 615, made up primarily of immediate family members of players and coaches, was the smallest crowd ever to witness a football game at the massive 107,601-seat venue at the corner S. Main Street and W. Stadium Blvd.

Big Ten protocols aimed to mitigate the spread of the ongoing coronavirus were to blame, with schools told not to sell tickets to the public for this abbreviated nine-game schedule.

Michigan State, fresh off a seven-turnover loss to Rutgers at home, was able to keep it together and score enough deep passes to stun Michigan, 27-24, at Michigan Stadium.  MSU Coach Mel Tucker was the first coach since Nick Saban in 1995 to win their debut against the University of Michigan.

Robert Cavalier de la Salle built a fort at the mouth of the St. Joseph River near St. Joseph. It was the first European outpost in the Lower Peninsula.

On November 1, 1815, the Michigan Territorial legislature passed an act that decreed that Negro, Indian, and mulatto slaves would be given corporal punishment rather than go to jail for non-capital offenses.

His father was one of the wealthiest men in America, a Detroit icon and entrepreneur. But when Edsel Ford, Henry Ford’s only child, married Eleanor Lowthian Clay on Nov. 1, 1916, it wasn’t a lavish affair. If anything, it was relatively modest.

Roughly 100 people attended the fall ceremony, held at Clay’s uncle’s house, department store tycoon J.L. Hudson. According to the newspapers that reported the nuptials at the time, it was “very comfortable, almost informal,” said Kathleen Mullins, president and chief executive office of the Ford House, which oversees the estate where the couple eventually settled with their four children, the Edsel & Eleanor Ford House.

“It was very much who they were,” Mullins said. “They were very much about family and friends.”

Edsel and Eleanor met at Annie Ward Foster’s Dancing School when she was 15 and he was 18. They lived just blocks apart at that time. When they married in 1916, she was 20 and Edsel was almost 23.

After their wedding, they left on a honeymoon trip out west, going as far as Hawaii. Eleanor kept a scrapbook that details their trip.

Edsel and Eleanor were the parents of four children: Henry II, Benson, Josephine, and William. Edsel, a talented designer, shared his love of art with his wife; they were astute collectors. The couple also received private art history instruction from Detroit Institute of Arts director William Valentiner, as mentioned in the book The Passionate Eye: The Life of William R. Valentiner. It was Edsel Ford who also bankrolled the execution of Diego Rivera’s Detroit Industry frescoes at the DIA.

“He was the love of her life,” Mullins said.