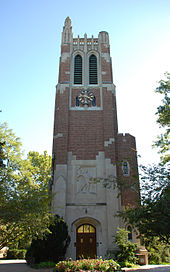 Beaumont Tower at Michigan State University marks the site of College Hall which is the first building in the United States to teach agricultural science.

For 20 years prior to the first introduction of the bill in 1857, there was a political movement calling for the creation of agriculture colleges. The movement was led by Professor Jonathan Baldwin Turner of Illinois College. For example, the Michigan Constitution of 1850 called for the creation of an “agricultural school”, although it was not until February 12, 1855, that Michigan Governor Kinsley S. Bingham signed a bill establishing the United States’ first agriculture college, the Agricultural College of the State of Michigan, known today as Michigan State University, which served as a model for the Morrill Act.

On February 8, 1853, the Illinois Legislature adopted a resolution, drafted by Turner, calling for the Illinois congressional delegation to work to enact a land-grant bill to fund a system of industrial colleges, one in each state. Senator Lyman Trumbull of Illinois believed it was advisable that the bill should be introduced by an eastern congressman, and two months later Representative Justin Smith Morrill of Vermont introduced his bill.

Unlike the Turner Plan, which provided an equal grant to each state, the Morrill bill allocated land based on the number of senators and representatives each state had in Congress. This was more advantageous to the more populous eastern states.

The Morrill Act was first proposed in 1857, and was passed by Congress in 1859, but it was vetoed by President James Buchanan. In 1861, Morrill resubmitted the act with the amendment that the proposed institutions would teach military tactics as well as engineering and agriculture.

Aided by the secession of many states that did not support the plans, this reconfigured Morrill Act was signed into law by President Abraham Lincoln on July 2, 1862.

After being pushed to limit by the confederate onslaught, the 4th Michigan regiment secured the “Wheatfield “.   During this time there was major action on Stony Hill. The Union forces under Zook were overrun by Confederate troops. This left the Michigan 4th’s flank unprotected.

As the 4th Michigan advanced the color bearer shouts out “Colonel I’ll be damned if I don’t think we are faced in the wrong way! The rebs are up there in the woods behind us, on the right!” The Confederate infantry attacked.

Colonel Jeffords, a 26 year old attorney from Dexter, Michigan, was the only officer to be bayoneted on either side during the Civil War. His words as he was bayoneted were ” Mother, Mother , Mother”.

After fierce fighting the 4th lost it’s colors. This valiant attempt to save the flag stemmed the tide of the Confederate attack allowing the Union forces to effect a solid defense behind the “Wheatfield.” This saved the day for the Army of the Potomac. 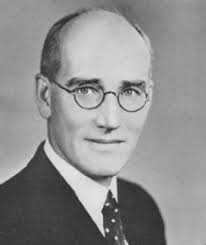 Comstock was born on July 2nd 1877 in Alpena, Michigan. He graduated from the University of Michigan in 1899. While at the University of Michigan he joined the fraternity Zeta Psi. Within the fraternity he created something known as “The Vision of Bill Comstock.” His vision was to unite all of the Zeta Psi chapters across the country by creating a newsletter called the Circle. He started the paper in 1909.

After graduating from the University of Michigan he began began building his non-political career which included real estate, banking and railroad construction.

Starting in 1924 Comstock served as a delegate to the Democratic National Convention. He voted for the Democratic nominee for the 1924, 1928 and 1932 conventions. The nominees in 1924 and 1928 were unsuccessful, the 1932 nominee, Franklin D. Roosevelt, who was the only one of the three nominees who were successful.

Comstock’s attempts to become Governor of Michigan mirrored the Presidential nominees he voted for at the conventions. In the 1926, 1928 and 1930 Gubernatorial elections in Michigan, Comstock was unsuccessful in his campaigns. In 1932 he successfully beat the incumbent governor to become the 33rd Governor of Michigan. During his time as Governor he established an old age pension system which would later fail. He also established an eight-day bank holiday, similar to the Emergency Banking act that was signed into law by President Roosevelt. The “holiday” closed the banks to prevent a run on the banking institutions in Michigan.

When James A. Garfield was attacked on July 2, 1881, the nation was shocked, enraged, and captivated. President for just four months, Garfield was shot by Charles Guiteau as he was about to board a train at the Baltimore & Potomac Railroad Station in Washington, D.C. Severely wounded, Garfield lingered until September 19.

An unsuccessful lawyer, evangelist, and insurance salesman, Guiteau believed Garfield owed him a patronage position in the diplomatic corps, and that the president’s political decisions threatened to destroy the Republican Party. Guiteau was convicted of murder and hanged on June 30, 1882. In 1883 Congress passed the Pendleton Act; it sought to reform civil service and limit the number of patronage seekers like Charles Guiteau.

Life and Death in the White House

On July 2, 1936, Henry Ford purchased the Wright brothers’ Dayton, Ohio, bicycle shop and Home And Moves them to Greenfield Village.

It was on July 2nd, 1936 that Henry Ford purchased the Wright Brothers’ home as well as their Cycle Shop. He had the buildings carefully taken apart and even removed the dirt under each to be removed to Greenfield Village. By November of that year both buildings were gone from Dayton. On the 71st anniversary of Wilbur’s birth, April 16, 1938, the two restored buildings were formally dedicated inside Ford’s open-air museum. Orville himself was a guest of honor at the dedication.

On July 2, 1942, Max Stephan of Detroit was found guilty of treason for assisting a Nazi prisoner.

A German prisoner-of-war escaped from Canada to Detroit in April 1942 and was introduced, by a former American pen pal, to Stephan, a leader in Detroit’s German community. Stephan gave the Nazi POW a several-day tour of Detroit evening entertainment spots then sent him by bus to Chicago.

Convicted of aiding and abetting the enemy in wartime, Stephan was the first American sentenced to execution since George Washington’s administration. President Franklin Roosevelt commuted Stephan’s sentence to life in prison.

The Daisy Air Rifle was first manufactured and sold as an incentive to help market windmills. According to Michigan Every Day, when Clarence Hamilton showed the owner of the Plymouth Iron Windmill Factory his metal air rifle, the owner exclaimed “Boy, that’s a daisy!”

Eventually, the company would abandon the manufacture of windmills altogether to focus on the air rifle. 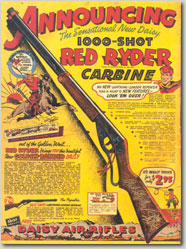 The company’s most iconic gun, the Model 40 Red Ryder Western Carbine, debuted in the 1940s and was the obsession of Little Ralphie in A Christmas Story.

Plymouth would remain the Air Gun Capitol of the World until 1958 when the company relocated to Arkansas.

More about a Christmas Story

In 1983, the story of young Ralphie Parker hit the movie screens. Ralphie was a fictional character from the mind of Jean Shepherd, whose fondest Christmas dream was of a “…two-hundred shot Red Ryder range model air rifle with a compass in the stock and this thing that tells time.”

The fact that the gun never existed (the gun described was actually a combination of the Red Ryder and an earlier gun, the Buck Jones Special) did not deter the movie production company. In spite of repeated warnings that “…you’ll shoot your eye out!”, in the end Ralphie got his gun.

A Christmas Story was an instant box office hit and is now a cult classic that can be seen each year on television from the day following Thanksgiving through Christmas.

DaisyKing.Com History of the Daisy

On July 2, 1972, the state Legislature established a lottery to provide additional revenues for the state.

On July 2, 1997, the Free Press reported that tornadoes and funnel clouds ravaged Michigan from Grand Rapids and Lansing to metro Detroit.

It the deadliest storm to hit Michigan since 1965.

Originally the storm had killed 12 people, but the death toll climbed to 16 when fumes from a gasoline-powered electric generator killed a 54-year-old Detroit woman and three of her grandchildren, according to a Free Press article from July 5.

Lido Anthony “Lee” Iacocca was an American automobile executive best known for the development of Ford Mustang and Pinto cars, while at the Ford Motor Company in the 1960s, and then later for reviving the Chrysler Corporation as its CEO during the 1980s.

In his 32-year career at Ford and then Chrysler, Iacocca launched some of Detroit’s best-selling and most significant vehicles including the Mustang, the Ford Escort, the Chrysler Minivan and Chrysler K-cars.

He was the only auto executive to have led two of Detroit’s Big Three automakers.

In his 32-year career at Ford and then Chrysler, Iacocca helped launch some of Detroit’s best-selling and most significant vehicles, including the minivan, the Chrysler K-cars and the Ford Escort. He also spoke out against what he considered unfair trade practices by Japanese automakers.

The son of Italian immigrants, Iacocca reached a level of celebrity matched by few auto moguls. During the peak of his popularity in the ’80s, he was famous for his TV ads and catchy tagline: “If you can find a better car, buy it!” He wrote two best-selling books and was courted as a presidential candidate.

But he will be best remembered as the blunt-talking, cigar-chomping Chrysler chief who helped engineer a great corporate turnaround.