He established the first trading post at what is today Saginaw, Michigan, as early as 1815. He also fought in the War of 1812 and played a key role in negotiating the Treaty of Saginaw in 1819. This Treaty was made between Gen. Lewis Cass and Native American tribes of the Great Lakes region (principally the Ojibwe, but also the Ottawa and Potawatomi) of Michigan. Native Americans ceded a large tract of land (more than six million acres (24,000 km²) in the central portion of the Lower Peninsula of Michigan.

In 1826, Campau moved South and established a trading post in what is today Grand Rapids, Michigan. Although he was not the first permanent white settler (that distinction falls to a Baptist minister named Isaac McCoy who arrived in 1825), Campau became perhaps the most important settler of Grand Rapids when, in 1831, he bought what is now the entire downtown business district of that city from the federal government for $90. He is considered the “father” of the town. 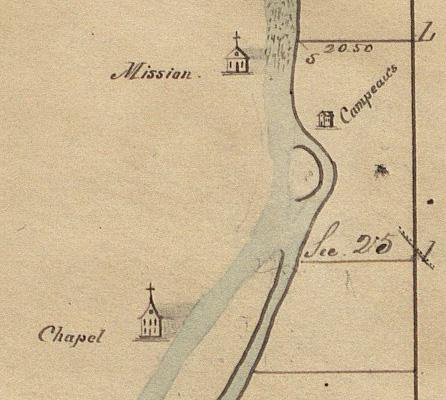 Section 25 of the of the April 1831 government survey map of Township 7 North, Range 12 West by Deputy Surveyor Lucius Lyon. On the west side of the Grand River a mission (Baptist) at the south end of the rapids and chapel (Roman Catholic) are depicted, and on the right a house indicating the Campeaus

Spelling of his surname varies. It is sometimes cited as “Campeau”.

He was also good friends with William Quevillon, the first white settler of Ludington, Michigan.

In 2007, with a second printing in 2009, a book about Louis Campau came out. Written by Christopher Mabie and published by Van Naerden Publishing, the book is titled Uncle Louis: The Biography Of Louis Campau, Founder Of Saginaw And Grand Rapids available at the Library of Michigan and through MelCat.