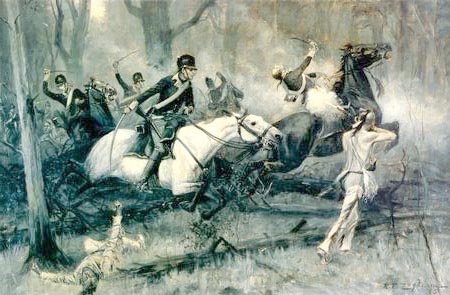 Led by General “Mad Anthony” Wayne, a force of two thousand Americans succeeded in defeating a confederation of one thousand Shawnee, Mingo, Delaware, Wyandot, Miami, Ottawa, Chippewa and Pottawatomie warriors just south of present-day Toledo, Ohio. The area was named Fallen Timbers because a tornado devastated the area just prior to the battle. Approximately thirty American soldiers were killed and 100 wounded. Native American losses were estimated at 200 dead and 500 wounded. The victory forced the British to surrender American outposts like Detroit, occupied since the end of the American Revolution, and opened the northwest to settlers.