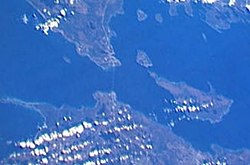 Bois Blanc Island is the largest island on the right. Mackinac Island is next to it.

On August 3, 1795, Chippewa Chief Matchekewis ceded Bois Blanc Island to the United States as part of the treaty of Greenville, an “extra and voluntary gift of the Chippewa nation”.

Due to the fact that the Native American tribes lost the battle of Fallen Timbers to General “Mad” Anthony Wayne, they also ceded most of Ohio, part of Indiana, sixteen strategic sites on Michigan waterways and Mackinac Island.  The loss of land for American settlement was partially mitigated by the promise of an exchange of goods to the value of $20,000 (such as blankets, utensils, and domestic animals).

Chief Matchekewis was a tribal leader of the Ojibwe people. His people were native to Michigan country, migrating to avoid pioneer expansion. In 1763, he took part in Pontiac’s Rebellion, participating in the capture of Fort Michilimackinac from the Kingdom of Great Britain.

In 1780 he commanded his tribes during the American Revolutionary War as an ally of Great Britain against the Kingdom of Spain. At the Battle of St. Louis, in charge of all of the native American troops, he was defeated by the superior firepower of Spanish gunpowder weapons.

And of course, on August 3, 1795 he signed over Bois Blanc Island and all of his other former territories.

During the War of 1812, U.S. Navy Captain Arthur Sinclair’s fleet took shelter at the island waiting to attack the British at Fort Mackinac. In 1880 the island provided a haven to alleged murderer Henry English who escaped from Pennsylvania authorities before his trial. He was apprehended on Bois Blanc by Pinkerton agents, returned to Pennsylvania and acquitted. During the twentieth century, Bois Blanc’s wilderness supported a lucrative lumber industry before giving way to tourism. Although primarily a resort in 1990, the island had forty-five permanent residents.

Bois Blanc Island, known as “Bob-lo” to area residents, is twelve miles long, six miles wide and has six lakes. In 1827 the United States government platted the island. The U.S. Coast Guard established a lifesaving station at Walkers Point in 1890. The following year the Pointe Aux Pins Association was formed.

In 1908, on behalf of the association, President Walter B. Webb hired the Mason L. Brown Company, a Detroit surveying firm, to plat and record the Point Aux Pins subdivision. Pointe Aux Pins was the first resort community on the island. Much of Bois Blanc Island is state-owned forest land containing White and Norway pines that tower two hundred feet tall. As recently as the 1950s, Bois Blanc provided lumber to Mackinac Island where woodcutting is prohibited.

Bois Blanc Island was without electric service until 1964, when the Presque Isle Electric & Gas Co-Op completed a project to install a continuous 3.7-mile underwater cable from Point Nipigon to Bois Blanc. At that time, there were approximately 200 structures on the Island. An electric service upgrade in 1999 replaced the original cable with two submarine cables spanning the Straits of Mackinac.

The Treaty of Greenville wikipedia entry.

Indian Reservations and Treaty Cessions Related to Michigan.  Compiled by Clarke Historical Library, Central Michigan University.  To find out information about specific treaties, just click on one of the numbers on the map (which corresponds to the treaty) or click on one of the links at the bottom.