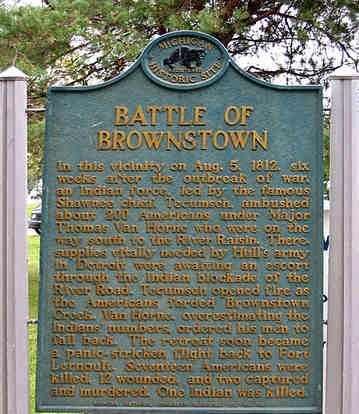 On August 5, 1812, Tecumseh and two dozen Indians ambushed 200 Michigan militia led by Major Thomas B. Van Horne at Brownstown Creek. Van Horne ordered a retreat back to Fort Lernoult, and the untrained militiamen scattered in a panic. According to the historic marker at the site, 17 were killed, 12 were wounded, and two were captured and murdered. One Indian was killed. The skirmish, which claimed the first Michigan casualties of the War of 1812, took place near the current site of Carlson High School in Gibraltar. 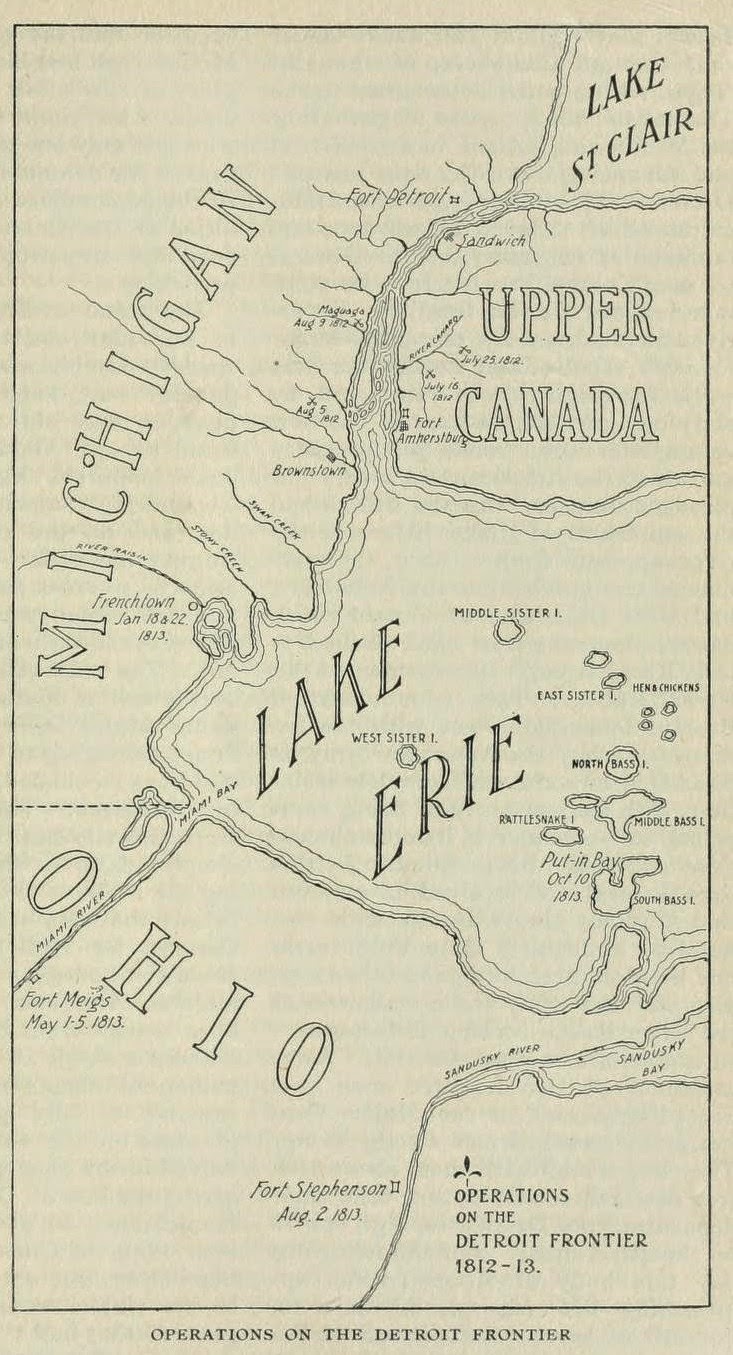 In early August of the summer of 1812, Brigadier General William Hull found his invasion of Canada hopelessly bogged down. Although he vastly outnumbered his enemy, the small regular British garrison at Fort Amherstburg (near the mouth of the Detroit River) was holed up in its redoubts, protected on the river side by the guns of the HMS Queen Charlotte and smaller vessels. Hull was further embarrassed when the Wyandot leader Roundhead and his followers joined Tecumseh. Roundhead’s village lay astride Hull’s supply road from Ohio.

Hull sent a column of infantry to reach a supply convoy that had arrived in Frenchtown (modern-day Monroe, Michigan). When they tried to cross a stream near Brownstown, the Americans were ambushed by a small force of Indians led by the Shawnee chief Tecumseh. Private Adam Walker, a soldier in the 4th United States Infantry (which took no part in this engagement), recorded what took place:

August 4—Major Van Horn, of Col. Findley’s regiment was detached with 200 men to the river Raisin, for the purpose of escorting a quantity of provisions to the army, which were at that place under the charge of Capt. Brush. He was attacked in the woods of Brownstown by a large body of Indians while his men were partaking of a little refreshment. So sudden and unexpected was the attack that it was impossible to form the men in line of battle, although every exertion was made by the officers for that purpose. In this defeat seven officers and ten privates were killed, and many more wounded—They retreated in great disorder, leaving a part of their killed on the field.

The actual battle took place on August 5. Two columns of Ohio militiamen marched about 100 yards apart, with the mail courier and an escort of horsemen between them. When the columns–each led by three horsemen and 12 riflemen—came to Brownstown Creek, the carefully planned formation bunched up as men waited their turn to cross the stream. Suddenly, the bushes on the far bank exploded in a volley of rifle shots. Robert Lucas, a private in one of the Ohio volunteer regiments (and simultaneously a Brigadier General of Ohio militia, and Captain in the regular US Army—long story) went along and saw the skirmish first hand (edited a bit for clarity and punctuation):

…The Indians lay in the bushes on the opposite side of the creek from us immediately on the bank in our front and right flank and in the cornfields on the left flank, the flank had to close at this place in order to cross the creek within 40 or 50 yards of each other, as soon as I had cautioned the right flank I rode up in front between the lines to Major Van Horne, in company with William Stockton.
The horsemen on the flanks was just entering the creek and myself Major Van Horne and William was of a breast in front between the lines, and had advanced within 25 or 30 yards of the Indians when we was fired upon, the first fire appeared to be principally directed at us that was a horseback.  My horse and William Stockton’s was shot mine wheeled and gave a fierce lunge and pitched against a horse that had his foreleg broke and pitched me off in the fall. My gun flew out of my hand. I raised and looked round for my gun but not seeing it, and seeing the Indians rushing out of the bushes in front and a heavy fire from them at me on the left.
I ran into the ranks of Capt Barrens Company without my gun and requested them to form and fire upon the Indians which they did. At the first fire Mr. Fowler and several others was killed, the fire soon was general on both sides, and finding ourselves overpowered and likely to be surrounded the Major ordered a retreat. We retreated in as good order as we possibly could from out situation, halting and firing upon the enemy where occasion would admit, although some retreated in a dastardly manner never firing upon the enemy at all, but yet the precipitate retreat answered in a good as it prevented the Indians and British that was detached for that purpose from cutting off our retreat…

The American casualties included three captains, three other officers, and ten enlisted men killed, another captain mortally wounded, and twelve enlisted men wounded. Two men were taken prisoner and executed by the Indians. The fleeing troops left the mail pouch with its vital communications about the status of Detroit to fall into the hands of the Indians. Only one Indian interpreter was killed in the engagement.

The question remains of how many Indians participated in the ambush. John Richardson, writing much later, asserted that Tecumseh had only 24 warriors with him. Major Van Horne, perhaps anxious to alleviate the blame for the panic, stated that he must have encountered between 150 and 200 Indians. Tecumseh’s legend notwithstanding, the truth must lie somewhere between the two numbers.

Finding himself cut off from any supplies or communication in Ohio, General Hull now prepared to send a stronger force of regulars under Lt Colonel James Miller of the 4th Infantry Regiment to break through the cordon and reach Captain Brush at Frenchtown.