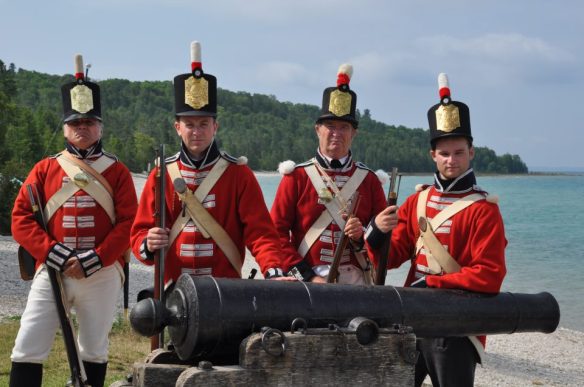 British soldiers stand around the British Landing cannon this morning. It was the 200th anniversary of the British landing in the dark of night July 16, 1812, for their surprise attack on the American fort the next day.  (Photo Credit:  Mackinac Island Tourism Bureau)

When the war was declared, there were a number of border posts. The British posts were in Canada, and the United States posts were in the United States territory, just across the waters from them. When war was declared in June of 1812, John Jacob Astor, who owned the American Fur Company, was near Washington, and he heard about the outbreak of the war and quickly sent a representative of his company to Fort St. Joseph, just inside Canadian waters, about 45 miles northeast of Fort Mackinac. He sent his representative there to protect his trade goods in case war broke out, but in doing so, he also alerted the British at that post to the outbreak of war.

They very quickly put together an alliance of regular troops, militia, and about 400 Native American allies, and they planned on and then successfully executed the capture of Fort Mackinac, which was the first engagement on U.S. territory during the War of 1812. It began the domino effect that eventually led to the capture of Fort Detroit and Fort Dearborn in Chicago, and so within a period of a month in the summer of 1812, the peninsulas of Michigan went from being under U.S. control to British control.

The battle of July 17, 1812 was a bloodless battle. The British landed on the north end of Mackinac Island under the cover of darkness on the night of July 16th and 17th, and brought with them two six-pound cannon, and again, a force numbering about 600. During the evening, they set up in the woods behind the fort on the elevated high ground, and the next morning when the sun rose, they fired a warning shot over the top of Fort Mackinac, and that was the first that the young American lieutenant in charge of the fort was even aware that war had been declared. He had only about 68 men inside the fort, and was looking out at a force ten times that size, and quickly decided to surrender without firing any shot in return.

The British arrived at Mackinac Island at 3:00 a.m. on July 17. Fort Mackinaw’s American commander, Lieutenant Hanks, immediately prepared for action. However, around 9:00 in the morning he discovered that the British were in possession of the higher ground above the fort and that British artillery was already directed at the Americans’ most defenseless position. At 11:30 in the morning, the British sent in a flag of truce and the fifty-seven United States officers and enlisted men at the Fort surrendered. After this victory, the British constructed Fort George (now known as Fort Holmes) about a half-mile behind the main Fort in order to protect it during future invasions. Great Britain retained control of Fort Mackinaw until the United States won it back in the Treaty of Ghent in 1815.

“Michigan at War: The Struggle for the Old Northwest, 1812-1815,” a documentary produced by the Michigan Commission on the Commemoration of the Bicentennial of the War of 1812, has been posted for free access on MI Streamnet through a partnership with Wayne Regional Educational Services Agency. Accompaning resource guide for teachers.