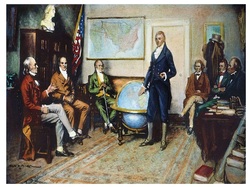 In the spring of 1817 the newly-elected President Monroe embarked upon a three-month Grand Tour of the Northeast, inspecting forts and other military installations as to their situation and condition, reviewing troops, and confirming that the agreement made with Great Britain in the wake of the War of 1812 to limit naval armament on the Great Lakes was being complied with.

Monroe spent five days in Detroit, the westernmost point of the tour, during which he was entertained at various receptions and balls held in his honor.

The President also visited Monroe, Michigan, which had recently been named for him.

His visit, along with the written accounts of other traveling dignitaries & observers during this period helped to dispel the negative image many people in the East held of Michigan as an “interminable swamp.”