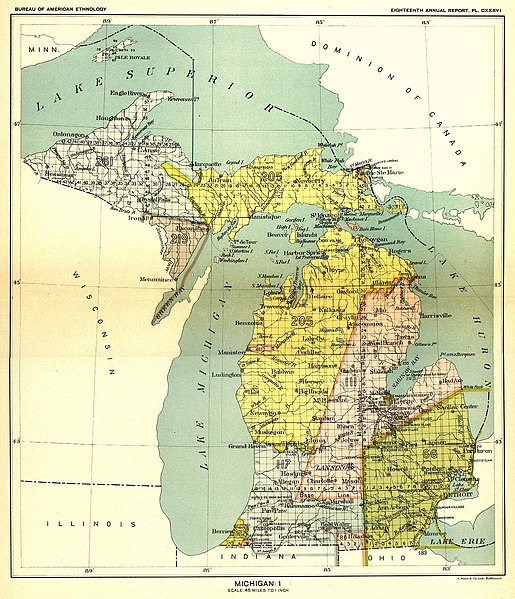 An experienced negotiator, Governor Lewis Cass was again called upon to work to secure more Indian lands for the United States. Therefore, he traveled to Chicago – then just a remote outpost – to meet with approximately 3,000 members of the Potawatomi, Ojibway, and Odawa nations. Believing it was morally wrong to influence negotiations with alcohol, an otherwise common practice, Cass forbade it. The result of the negotiations was the Treaty of Chicago, ceding of all Lower Peninsula lands south of the Grand River, except for a small piece of land in present-day Barrien County. The price for the almost five million acres: about $10,000 in trade goods, $6,500 in coins and a twenty-year annuity valued at about $150,000.

See the L-shaped gray portion of the map in southwest Michigan for area ceded.

Chief Match-E-Be-Nash-She-Wish signed the Treaty of Chicago in 1821, which was the first land cession to the U.S. government that directly affected his Band. Under the terms of the 1821 Treaty, the Tribe retained a three-square-mile reservation located at present day downtown Kalamazoo. The Match-E-Be-Nash-She-Wish Band of Pottawatomi Indians (Gun Lake Tribe) would eventually give us this reservation by signing the Treaty of St. Joseph in 1827, but remain in Michigan until this day, now operating the Gunn Lake Casino south of Grand Rapids.