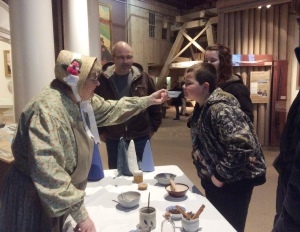 Happy birthday, Michigan!  On January 26, 1837, more than a year after Michigan adopted its first constitution and elected its first governor, President Andrew Jackson signed the bill making Michigan the nation’s 26th state. The delay was caused by a disagreement and subsequent “war” over the port-town Toledo. The compromise that gave Michigan the western two thirds of the Upper Peninsula shaped Michigan’s future of copper and iron riches, as well as timber and other natural resources.

In honor of the event, the Michigan Historical Center annually hosts a special Statehood Day celebration on the Saturday closest to the date.  On that day, admission to the Michigan Historical Museum is free, courtesy of the Michigan History Foundation.  Normal activities might include playing with toys that children would have enjoyed in 1837; turning wool into yarn; learning about quilt making; exploring Native American life; and snacking on a Michigan birthday cookie. In the Archives of Michigan on the second floor, visitors can view statehood documents, including Michigan’s first constitution.

In 2018, the Michigan History Center’s special celebration started at 10 a.m. and concluded at 4 p.m. and provided the following opportunities:

New for 2018! Join our Statehood Day Euchre Tournament. Euchre/Uker/Juker was rising in popularity throughout the United States during the Statehood Era and was one of the most fashionable games in the country by the late 1800s. It remained “on top” until the turn of the century when Bridge began to eclipse its popularity.

For those who can’t make it to Lansing, some of these statehood documents are available to view online at seekingmichigan.org/discover/early-documents.

Can’t attend? Throw your own birthday party for Michigan, celebrating the fact that we became the 26th state on Jan. 26, 1837. Every great party needs a theme and you can never go wrong with dinosaurs. So focus your party around a mastodon theme. For those who have been living in the ice age, the mastodon is our state fossil. Mastodons, which were basically elephants on steroids, roamed Earth until they went extinct about 10,000 years ago. More than 250 mastodon fossils have been found in Michigan. So if you want the mother of all scavenger hunts, take your friends and relatives on a mastodon fossil hunt. Hint: Start in Saline, where mastodons used to hang out.

It’s always fun to do some arts and crafts at a birthday party, so get the kids together and try to come up with a new state seal and flag.

Our official state flag looks like two cartoon characters — an elk and a moose — are standing on a teeter-totter, holding a shield that says, “Tuebor,” which means — “Fire Millen!” — in Latin. No, just kidding. It actually means, “I will protect.”

Show off your knowledge

If you want to be the life of your Michigan birthday party, it’s important to know some obscure Michigan facts.

If someone happens to ask you, “Hey, man, do you know our state soil?”

You should not say, “Ketchup and mustard on a bowling shirt.”

And if they ask, “Why the heck do we have a state soil?”

You should say, “I have no idea. Pass me another coney dog and shut up. It’s your turn to bowl.”

Serve up some local flavor

If you are going to have food at your Michigan birthday party, you will look like a real smarty-pants by serving dry black beans, blueberries and pickling cucumbers because Michigan ranks first nationally in the production of all three. You get immediate induction into the Michigan Food Hall of Fame if you include mints, cherries and a pasty. Bring along some Pepto-Bismol because, frankly, it sounds pretty nasty to serve all of that together.

It is important to remember that Michigan’s first residents were the Ojibwa, Ottawa and Potawatomi American Indians.

So if your friend says, “How do you want to celebrate Michigan’s birthday?”

You can say, “Let’s hit the casino. I mean, um, let’s go to the casino so that we can honor those who came before us. The first Michiganders. The dudes who gave us Thanksgiving football and the casinos.”

Take in sights — or your pop cans

According to a rumor, this is what somebody mumbled during the first Michigan-Michigan State basketball game, while stuffing his face with a hotdog. He was trying to say, “If you seek a pleasant peninsula, look about you.”

So today, on this special occasion, go out and look about you:

So happy birthday, Michigan. Blow out the candles. Open the presents. And revel in everything that makes this state unique.

Source: Jeff Seidel,”Break out the berries and coney dogs, Michigan turns a year older today”, Detroit Free Press, January 26, 2008. Back then Matt Millen was President and CEO of the Detroit Lions from 2001 until week 4 of the 2008 NFL season. His eight-year tenure as head of the franchise led to the worst eight-year record in the history of the modern NFL (31-84, a .270 winning percentage),[4] and resulted in his termination on September 24, 2008. That explains the Fire Millen comment in the article.

On February 15, 1837, the Detroit Free Press carried an article about Detroit celebrating Michigan’s statehood with toasts, speeches, and bonfires. The day began with the firing of a salute of 26 guns and the Brady Guards made an appearance with their splendid uniformed equippage.