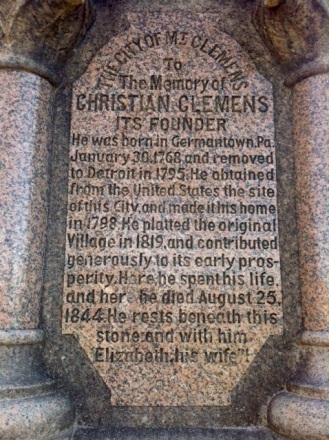 Christian Clemens, pioneer settler of Mt. Clemens (every historical record calls him that! as if it were his title!), was born in 1768, and came to Detroit from his native Pennsylvania in 1795. In 1798, he was a member of the party that surveyed what would become Mt. Clemens. Around 1800, Christian Clemens moved from Detroit to his wilderness home in Mt. Clemens and opened a distillery on the banks of the Clinton River. During the War of 1812, Clemens was captured by the British and held prisoner at Fort Detroit. According to a strange story in History of Macomb County, Clemens was friends with his jailers and sometimes, you know just casually, scaled the walls of the Fort at night and went to hang out with his family in town.

For at time, Christian Clemens’ house in Mt. Clemens was a stopover for settlers coming to town. General John Stockton, in an account delivered to the Michigan Pioneer Society in 1883, writes that his was one of five families staying at the place in 1817:

We came through from Detroit in a day on the Lake road. There were already four families in Judge Clemens’ house, but we moved in, making the fifth family, and remained there till we could build a log house, which was not many days.

In 1818, the village of Mt. Clemens was named after its most prominent settler and — perhaps because Christian Clemens owned most of the land in the town, and agreed to convey land and money for the courthouse — appointed it the seat of newly-established Macomb County. Christian Clemens became Chief Justice of the County Court, County Treasurer, and Probate Judge.

For the rest of the story, read: