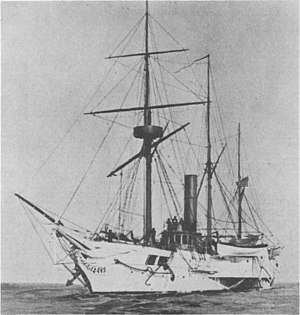 The USS Michigan was the United States Navy’s first iron-hulled warship. Commissioned in August 1844, the Michigan was then, and for decades thereafter, one of the fastest ships in the world. For sixty-eight years (the third longest active service of any Navy vessel) she patrolled the long U.S. border with Canada from Niagara to Houghton, rescued dozens of ships and hundreds of sailors, enforced law and order throughout the upper Great Lakes, and recruited thousands of sailors for the Navy. Christened by President John Tyler in December 1843, the U.S.S. Michigan entered active service on August 19, 1844.

As it turned out, the Michigan never fired a shot in anger and spent most of her career showing the flag in the far reaches of the lakes, carrying survey parties and assisting ships in distress. Each winter she returned to Erie where many of her crew had families and second jobs.

However, the ship was involved in a number of non-routine actions.

When United States District Attorney George Bates decided to arrest King James Strang on Beaver Island in 1851, he asked President Millard Fillmore for the support of the iron-hulled paddle steamer USS Michigan, the most formidable warship on the Great Lakes. Although the Mormons had mounted cannon on a sailing vessel run aground in the harbor, the sight of the Michigan’s imposing black hull, powerful eight-inch cannon, and complement of Marines assured that there would be no resistance to the federal arrest warrants Bates carried.

Two years later, in 1853, the Michigan was assigned to stop massive thefts of timber from federal land along Lake Michigan. Her crew managed to capture several “timber pirates” who were then sent by rail to Detroit for trial before U.S. District Judge Ross Wilkins. Although they could not stop all of the piracy, the Michigan and her crew were sufficiently successful that one frustrated crew of pirates rammed her amidships in the dark of night with the largest propellor driven steamer on the lakes. Unfortunately for the pirates, their ship’s hull was made of wood, and it bounced off and limped away while the Michigan’s iron hull did not even spring a leak. The Michigan promptly turned and ran down her assailant, although the Michigan’s captain, thinking the collision was an accident, let the wooden ship sail on as best it could.

The USS Michigan was moored to the dock at Beaver Island Harbor on June 16, 1856 when two fallen-away Strangites assassinated their “king.” The killers surrendered to the captain of the Michigan who delivered them with the sheriff at Mackinaw Island, the nearest civil authority not controlled by Strang’s men.

During the first two years of the Civil War, the Michigan toured Great Lakes ports, enlisting four thousand sailors for the Union Navy. In the summer of 1863, rumors of Confederate plots to invade the North from Canada caused the Navy to increase the Michigan’s armament to fourteen cannon, including six powerful Parrott rifles. In October 1863, the Michigan was assigned to guard the Union prisoner-of-war camp on Johnson’s Island just inside Sandusky Bay. While she was there, Confederate agents did make two attempts to seize her and release the prisoners, but neither attempt was successful, and no Confederate force ever came within range of her guns.

Ironically, the government often used the Michigan’s armament and crew to intimidate its own citizens rather than British or Confederate invaders. During the Civil War, the Michigan was called upon to use her looming presence to prevent draft riots in Detroit, Milwaukee and Buffalo. Just after the war, in 1865, her crew helped put down armed strikes by iron and copper miners at Marquette and Houghton. A year later, she thwarted a raid into Canada by hundreds of members of the Fenian Brotherhood, Irish-Americans who planned to occupy part of Canada until Britain freed Ireland.

The USS Michigan (renamed the USS Wolverine in 1905 so the name USS Michigan could be transferred to a battleship), remained in service until 1923.