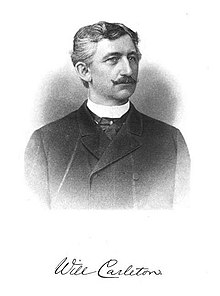 Engraving of Will Carleton by Arthur Rice, 1890. Carleton, a farmer’s son, was an 1869 graduate of Hillsdale College and internationally-recognized poet, editor, and lecturer, described the inspiration for his most well-known poem:

“Over there to the west, in Hillsdale, there stood in the old days a county poorhouse,” he said.
“Sometimes, I used to visit the inmates there and hear their troubles.
And sometimes I used to see old people … who had out their property in the hands of their children, passing up the road on their way to the poorhouse on the other side of the hill.”1

Upon his death, Carleton became the unofficial “poet laureate.”  With the Public Act 51 of 1919, the Michigan legislature required teachers to teach at least one of his poems to their students, and October 21 was officially named as Will Carleton Day in Michigan in memory of “Michigan’s pioneer poet.”2

These selections by and about Will Carleton held at the Library of Michigan:

One of the authors featured in Ink Trails: Michigan’s Famous and Forgotten Authors.   Also available online