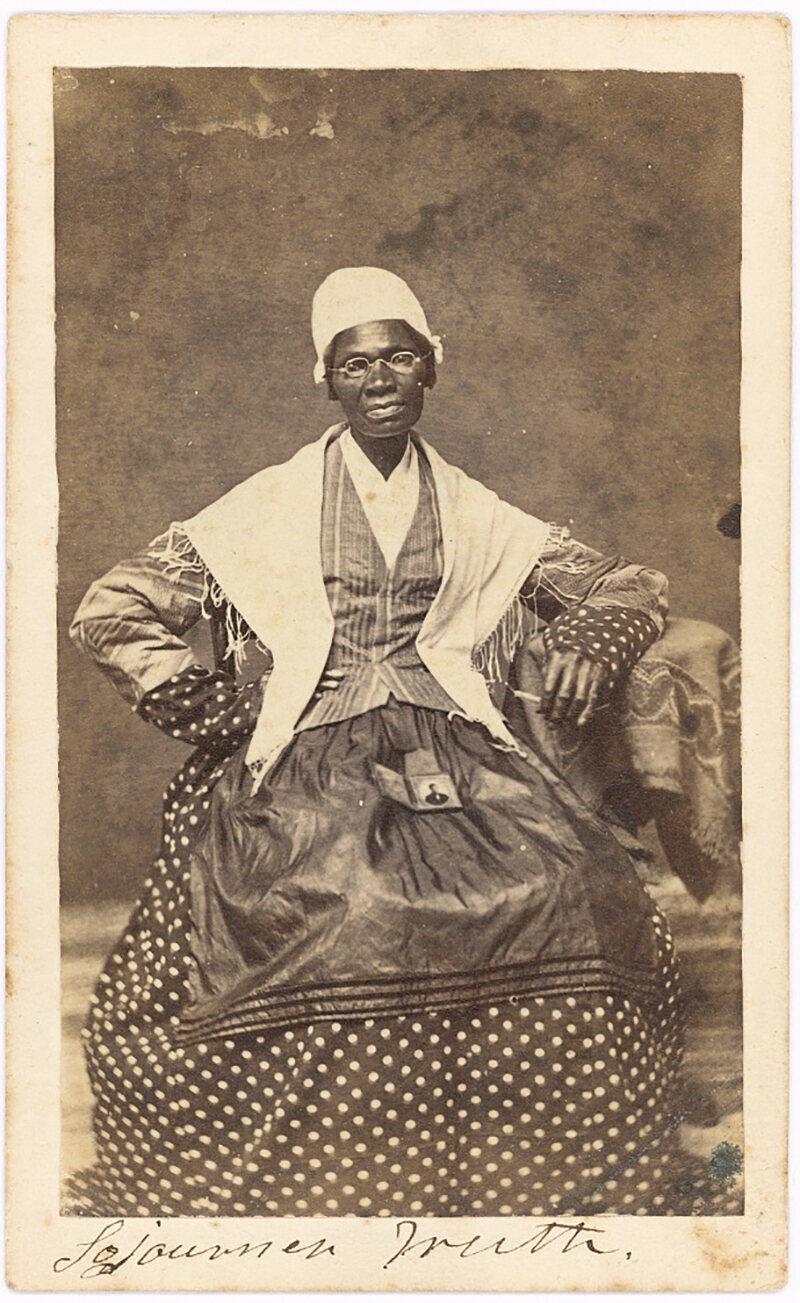 Former slave and Battle Creek resident Sojourner Truth delivered her famous “Ain’t I A Woman” Speech on May 28, 1851.

For more information and the words of the speech, see Sojourner Truth courtesy of the National Park Service.

Sojourner Truth–slave, prophet, legend/ by Carleton Mabee, with Susan Mabee Newhouse.  New York : New York University Press, [1995]  Many Americans have long since forgotten that there ever was slavery along the Hudson River. Yet Sojourner Truth was born a slave near the Hudson River in Ulster County, New York, in the late 1700s. Called merely Isabella as a slave, once freed she adopted the name of Sojourner Truth and became a national figure in the struggle for the emancipation of both blacks and women in Civil War America. Despite the discrimination she suffered as both a black and a woman, Truth significantly shaped both her own life and the struggle for human rights in America. Through her fierce intelligence, her resourcefulness, and her eloquence, she became widely acknowledged as a remarkable figure during her life, and she has become one of the most heavily mythologized figures in American history. While some of the myths about Truth have served positive functions, they have also contributed to distortions about American history, specifically about the history of blacks and women. In this landmark work, the product of years of primary research, Pulitzer-Prize winning biographer Carleton Mabee has unearthed the best available sources about this remarkable woman to reconstruct her life as directly as the most original and reliable available sources permit. Included here are new insights on why she never learned to read, on the authenticity of the famous quotations attributed to her (such as Ar’n’t I a woman?), her relationship to President Lincoln, her role in the abolitionist movement, her crusade to move freed slaves from the South to the North, and her life as a singer, orator, feminist and woman of faith. This is an engaging, historically precise biography that reassesses the place of Sojourner Truth–slave, prophet, legend–in American history. Sojourner Truth is one of the most famous and most mythologized figures in American history. Pulitzer-Prize-winning biographer Carleton Mabee unearths heretofore-neglected sources and offers valuable new insights into the life of a woman who, against all odds, became a central figure in the struggle for the emancipation of slaves and women in Civil War America.