On October 5, 1852, State Normal School, the first of Michigan’s state-supported teacher training schools  and the first of its kind west of the Allegheny Mountains, was  dedicated at Ypsilanti.

A normal school had been proposed in both houses of the state Legislature in 1848, but failed to gain traction. The following year, an act calling for “the instruction of persons both male and female in the art of teaching, and in all the various branches that pertain to a good common school education; also, to give instructions in the mechanic arts, and in the arts of husbandry and agricultural chemistry, in the fundamental laws of the United States” was passed.

Ypsilanti donated four acres and another four were purchased. Other locations considered were Niles, Gull Prairie near Kalamazoo, Jackson and Marshall. 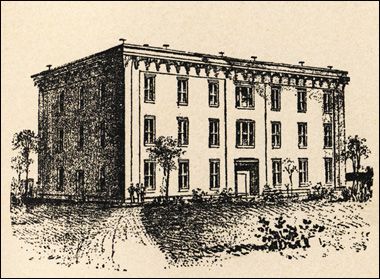