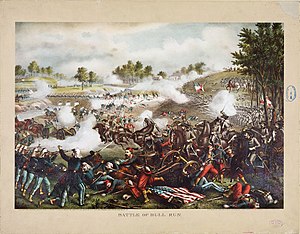 On July 21, 1861, the First Michigan Infantry Regiment lost 6 men in the first major land battle of the American Civil War. Union and Confederate armies clashed near Manassas Junction, Virginia, Known as the First Battle of Bull Run (or Manassas), the engagement began when about 35,000 Union troops marched from the federal capital in Washington, D.C. to strike a Confederate force of 20,000 along …a small river known as Bull Run. After fighting on the defensive for most of the day, the rebels rallied and were able to break the Union right flank, sending the Federals into a chaotic retreat towards Washington. The Confederate victory gave the South a surge of confidence and shocked many in the North, who realized the war would not be won as easily as they had hoped.

The First Michigan Infantry was led by Colonel Orlando Willcox, who was wounded and captured by the Confederate forces. A year later he was released and rejoined the Union Army. “What’s really wonderful about Orlando Willcox, at least in recent years, is that his memoirs and journals and his Civil War letters, the letters obviously written during the war, the journals written during the war, and then the memoirs after the war, kind of after he passed away in 1907, were in a trunk that was only discovered in the 1990s. They have since been edited and been published by Kent State University Press. It’s in a publication entitled “Forgotten Valor,” which is a really good look at what it was like to be a Civil War officer, and a number of the commands at a number of the fields of battle, during the war.” Willcox received a Congressional Medal of Honor for his efforts during the Battle of Bull Run in the 1890s, a rare feat for a General.