Even if you’ve never heard of the man, you know the name — you’ve no doubt spent hours sitting in the freeway named in his honor.

John Christian Lodge was a blue blood in Detroit’s political history and the backbone of city government for decades. He devoted half a century of his life to serving the public and spent his entire 87 years in the city.

Lodge worked as a reporter and editor at the Free Press before leaving in 1896 after getting a taste of the political bug. He entered public service as chief clerk to the Wayne County Board of Auditors, before being elected to the state House in 1907. While he was in the Legislature, the Republican was elected a city alderman, a post he would hold from 1908 until 1918, when the former 42-man body was abolished and replaced by the current system used today. Lodge was the first president of the nine-member council system.

The cigar-loving Lodge would become one of the most popular — and longest-serving — members of the Common Council. He served in various capacities in politics for 50 years and was long considered the elder statesman of Detroit. The Free Press wrote how “his very appearance seemed to stimulate a smoother operation of the legislative wheels and pistons.”

He also was known for his encyclopedic knowledge, even into his 80s. “Whenever a city editor wants to check on a story about old Detroit, even dating back 70 years, he usually sends a reporter over to the City Hall to see John Christian Lodge,” the Free Press wrote in 1940. “He can rattle off dates and details of city events and the men who figured in them with amazing accuracy. The only time his photographic memory blurs is when asked whether it was Aug. 12 in 1861 or 1862 that he was born.”

His first two trips to the mayor’s office were as acting mayor. As council president, he took over for James Couzens — who was appointed to the U.S. Senate — in 1922, and for Joseph A. Martin, who resigned in 1924.

Detroit was most certainly a city of the Roaring Twenties, and no political figure played so prominent a role in guiding its destiny during that time than Lodge. He oversaw Detroit transforming from a Podunk little town to an industrial powerhouse. In an era when the country was going gangbusters, Lodge urged a slow and steady approach and strongly opposed radical changes in government. Keep in mind, he was a living link between the horse-and-buggy Detroit and the hustle-and-bustle Motor City. In 1868, he watched the laying of the cornerstone of Detroit’s Old City Hall, which he would fight tooth and nail to save from the wrecking ball. He was one of five men who convinced legendary Mayor Hazen S. Pingree to run for mayor. As council president, he took over as interim or acting mayor for  James Couzens — who was appointed to the U.S. Senate — in 1922, and for Joseph A. Martin, who resigned in 1924.

He was a bit of a goody-two-shoes. In 1914, he was local chairman for the national “Go to Church on Sunday” campaign. He recalled in his autobiography that he was shocked by how much double-action there was in the political machine. He was clean. He was honest. And he loved Detroit and almost unfailingly tried to do everything that was in the city’s best interest.

In the 1927 election, Lodge ran against incumbent Mayor John W. Smith, another popular, honest, all-around good guy. Smith replied to his friendly challenger: Lodge took on Smith — not because he hated the guy or anything, but because they disagreed over constructing the Ambassador Bridge. Lodge knew that it would be an economic boon for Detroit and supported the plan; Smith didn’t like the idea of a privately owned bridge and opposed it.

Just how popular was he? He won the race without giving one campaign speech or making a single political promise, and he wouldn’t allow anybody to besmirch Smith. Seriously.

“Old-timers will tell you that Councilman Lodge is that unique figure in political life who never announced his candidacy or asked people to vote for him,” the Free Press continued. “The people ask him to run, and he consents. He does not make public appearances or political speeches. He displays no banners or posters and he passes out no cards with his picture on them.”

Unlike many of the city’s worst mayors, Lodge was never interested in the mere making of money. He lived and died a poor man. He dedicated his entire life to making Detroit a better place.

Lodge died of pneumonia on Feb. 6, 1950, at age 88. He is buried on a knoll at Elmwood Cemetery, overlooking the city he loved and served for more than half a century.

“Few governmental communities have been as fortunate as Detroit has been in possessing anything like the continuity of Lodge’s experience and integrity,” the Free Press Editorial Board wrote in 1948. “As long as character, personality and deep devotion to the public interest exist, the influence of John C. Lodge as the conscience of Detroit will never wane.”

Interesting side note: Lodge never learned to drive, but he did fly in an airplane once, with his great nephew — renowned aviator Charles Lindbergh.

Last week, Detroiters introduced another new model. It had no balloon tires, no windshield, no horn. It was a mayor not a motor. It was Mayor John Christian Lodge who won office without benefit of one campaign speech, one political promise, one rooster-boost. Wearing a new grey suit and looking not unlike Henry Ford, Mayor Lodge offered his right hand to all-comers. Policemen gripped so hard that Mayor Lodge, wincing but glad, had to give others his left hand. When subordinate city officials were brought forward for formal introduction, Mayor Lodge called them by their first names. He had known them well during his 17 years on the city council (nine years as president). Oldest residents came. Bankers, waiters, children and firemen came. The Mayor’s niece came—Mrs. Evangeline Lodge Lindbergh. Detroit congratulated itself as well as its mayor. . . . In the night, 18 fiery crosses were seen. “Utterly absurd, silly and foolish,” said Mayor Lodge, implying that he could not help it if the Ku Klux Klan had the Spirit of Me-Too.

Related Story: How the Building of the Ambassador Bridge put John Lodge in the Mayor’s Office:

The Ambassador Bridge is a Detroit landmark, lighting up the river and making for an impressive skyline. It might not seem like a terribly long bridge today, but it was actually the longest suspension bridge in the world when it opened in 1929. The 1920s saw a great deal of new construction in the city, including the Fisher and Penobscot buildings. The city was growing at a rapid pace, yet it had no easy way for residents to reach its closest neighbor, Windsor (a rail tunnel, built in 1910, helped with freight traffic). Many people from around the Midwest and east coast tried to make plans for a bridge, but none of the plans came to fruition. That is, until John W. Austin met up with Joseph A. Bower. The two of them hatched a plan for a privately funded bridge between the two nations. They raised the funding, and received approval from all the necessary authorities, except one. Detroit Mayor John Smith opposed the plan, and vetoed the project. He did not like the idea of a privately owned bridge, and it seemed like all was lost.

However, Bower knew his plan was popular, and so decided to fight the veto. He put up $50,000 to have a special election on the issue of the bridge. Soon, both sides were fighting for votes, with newspaper advertisements, endorsements from leading citizens, and radio ads. In the midst of all this, Mayor Smith was up for re-election. John C. Lodge, a supporter of the bridge, used the issue to launch his mayoral campaign, causing the two issues to be inexorably intertwined. Mayor Smith was ruthless in his campaigning, which turned out to be his undoing. The day before the election, he gave a speech on the radio condemning the bridge. After the speech, he ran into H. H. Esselstyn, the Commissioner of Street Railways and former engineer on the Belle Island Bridge. It turned out Esselstyn was planning to make a contradictory speech in support of the bridge. Incensed, Mayor Smith fired him on the spot. Esselstyn still made the speech, despite his shock. At the end, he told the listeners that due to his opinions, he had been fired from his position. The unprofessional behavior of the mayor turned even more Detroiters against him, and his side was walloped the next day in the election. The bridge won by an 8 to 1 margin. Later that year, Smith was defeated by Lodge for the mayoral primaries (although he would become mayor again in 1933).

Construction, which had actually slowly begun before the election, picked up in earnest. It was finished in just over two years (and ahead of schedule). Unfortunately, the bridge opened 21 days after the crash of the New York Stock Exchange, at the very beginning of what would become the Great Depression. Additionally, the Detroit-Windsor Tunnel opened in 1930, creating competition for the bridge’s traffic. The bridge endured a decade of financial troubled before things began looking up in the 1940s. Although passenger traffic was stayed low due to travel restrictions and gas rationing during the war, truck traffic increased greatly due to war manufacturing. Finally, the bridge was on solid financial footing. Over the years, use has continued to grow, especially by commercial trucks. Many improvements have been made to the bridge to stabilize the now aging infrastructure and help manage the growing number of vehicles. Despite these changes, the current bridge is still not enough to handle the daily traffic from Detroit to Windsor. For this reason, a proposal was created in 2004 to build a  new bridge across the Detroit River, this one publicly owned. The proposal has been through multiple setbacks, including vehement opposition from the Ambassador Bridge’s current American owner, Manual “Matty” Moroun, but it has prevailed and preliminary construction has begun. In fact, just this week two huge obstacles to the bridge were overcome. It will surely be a while before the new bridge, named the New International Trade Crossing, will open – but when it does, Michiganders will have a whole new way to get to Canada 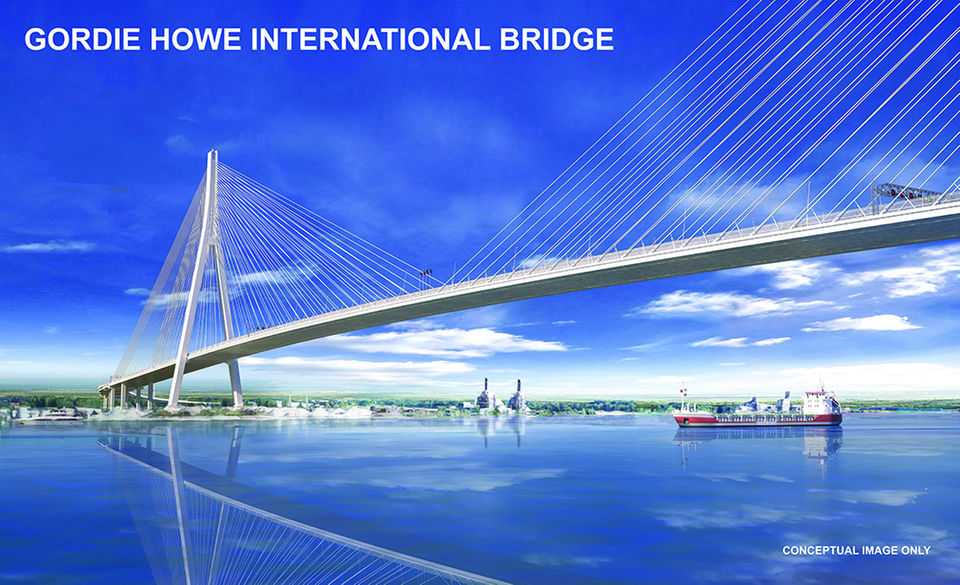