Horse-drawn rail-cars operated along the streets of Detroit for thirty years before the operation of the electric-powered streetcar.  In the above photo, taken shortly before the arrival of the first electric cars, an enclosed  horsecar can be seen traveling east along Michigan Ave., passing Detroit’s second City Hall, which opened in 1871 and was located on Woodward
between Michigan and Fort Street.  An open-air bench car also approaches heading south along Woodward Avenue.  (Photo source: Schramm Photo Collection)

On January 5, 1863, a $5,000 deposit was made to the city on behalf of a company backed by a group of investors based out of Syracuse, New York.  On May 9, 1863, a thirty-year franchise was granted to a Cornelius S. Bushnell, et al., who organized the Detroit City Railway Company, which was incorporated under the same name on May 12, 1863.

Construction began on June 30, 1863, on Jefferson Avenue near Bates Street. The trackage was similar to that used on steam railroads and was laid within the middle of the street. The track rested on a two-inch bed of cinders, brought flush with the top of the rails to provide footing for the horses. The track gauge used was four feet seven inches. The first line to be constructed was along Jefferson Avenue, from the Michigan Central Train Depot at Third Street (currently the location of Joe Lewis Arena) eastward to the city limits at Mt. Elliott Avenue. The first two streetcars arrived from Troy, New York on July, 31, 1863, with city officials, a number of prominent citizens, and representatives of the press making that first trip over the line on August 1, 1863. 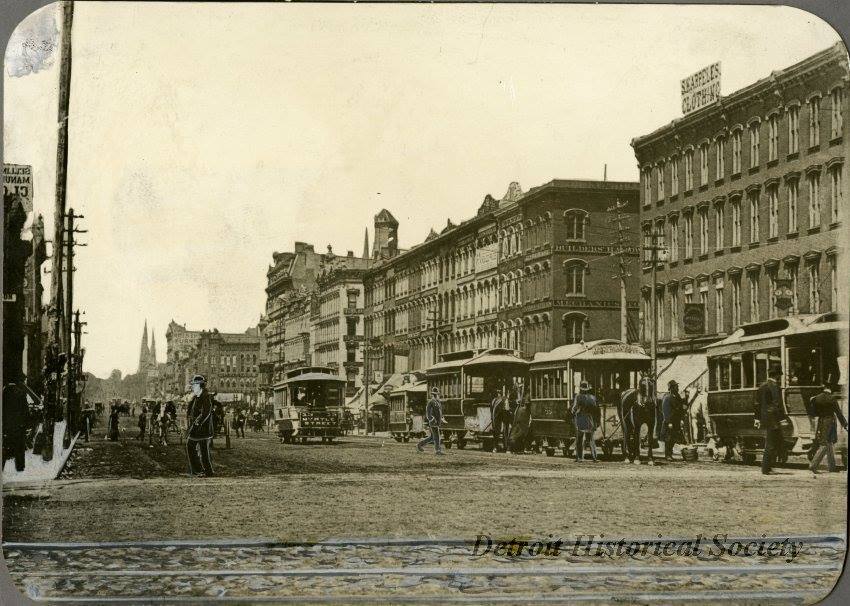 This photo offered by the Detroit Historical Society shows a row of horse-drawn streetcars on Woodward taken from the SW corner of Woodward & Jefferson, ca. 1887.

On the evening of Monday, August 3, 1863, a major event would occur which would forever impact the future of Detroit, as men, women and children thronged the sidewalks along Jefferson Avenue, between Woodward and Randolph, waiting with excited anticipation to climb aboard the four cars lined-up and ready to receive the first passengers. Free rides were offered that day for all passengers, as the tiny rail cars bounced along East Jefferson Avenue, from Randolph Street to Elmwood Avenue. The era of public transportation in Detroit was now becoming a reality.

The next day, August 4, 1863, regular service would begin with eight small horse–powered cars now operating along Jefferson Avenue, initially providing service from the Michigan Central Train Depot at Third Street to Elmwood Avenue. On October 1st, the service was extended to Mt. Elliott (the city’s eastern limits). The fare was five cents or twenty-five tickets for a dollar.

For over thirty years, horse–drawn streetcars pulled passengers along Detroit’s major roadways at a clippety–clop pace for five cents. The horsecars offered not speed, but comfort and safety. Instead of clattering along the stone and brick streets, metal wheels on steel rails set into the roadway transported riders with some form of relative calm. The streetcar made “all-weather” transportation a possibility for the first time along the city’s mostly unpaved dirt roads. As streetcars became more dependable, they were credited with being major contributors to the development of the city’s prosperity and instrumental in building up the outer portions of the city. This more than guaranteed that the clang! clang! clang! of the streetcar bell would continue on as part of Detroit’s transit scene as the city entered the 1890s.

Before the QLine: Detroit’s streetcar history, Detroit News. May 11, 2017.