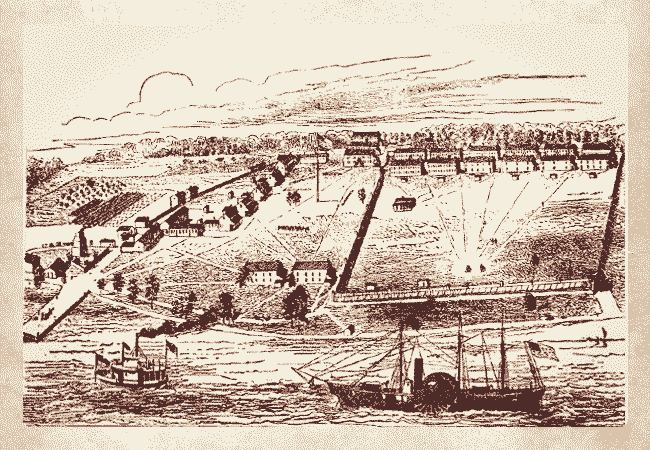 The above illustration of Johnson’s Island was made by Edward Gould, Company B, 128th Ohio during the war. In the foreground is the U.S.S. Michigan. On the left is the fort’s wharf with a road leading back to the troops quarters and on to where the artillery position was created in 1864. Inside the stockade you can see the 12 2-story block houses that housed the prisoners. Each block house was responsible for its own mess. Behind the last row of block houses were the latrines or what they called their “sinks”. The radiating lines running from the block houses to the center are paths leading to pumps that were used to pump water from the bay into wells used by the prisoners.

No Civil War battles were fought on Michigan soil, but many Great Lakes mariners and ships fought for the Union Cause. It took the Union prison at Johnson’s Island in Lake Erie near Sandusky to bring the Civil War directly to the front doorstep of Ecorse, Michigan, a small village on the Detroit River. Confederates had tried numerous times to escape from the prison at Johnson’s Island, but the record shows only a few successful escapes before 1864. The year 1864 proved to be a successful year for escapes.

The Sandusky Register reported the escape of six rebel prisoners on January 4, 1864. The Register said that six Confederates – Major Stokes, Captain Stokes, Captain Robinson, and Captain Davis, all Virginians, Captain McConnell of Kentucky and Major Winston of North Carolina made a crude ladder by tying the legs of a bench with a clotheslines across a board at spaces of about three feet, about four feet short of the desired length. They gathered as much civilian clothes as they could from friends in the prison.

Some of the prisoners made it as far as Trenton, Michigan, before crossing the ice to freedom in Ontario. They eventually traveled up the St. Lawrence River to the ocean and Bermuda. Then they sailed on the blockade runner Advance to North Carolina and home.