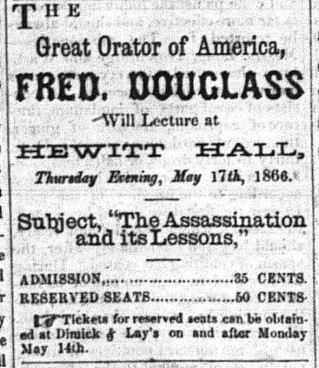 Frederick Douglass is one of the most iconic figures in American history, and, during the height of his career, he visited Ypsilanti on three different occasions to give speeches.

According to Matt Siegfried, a local Ypsilanti historian, Douglass came to Ypsilanti because of its important role in the Underground Railroad and the fact that it has a thriving Black community.

“The first speech occurred on May 17, 1866.  The editor of the local Ypsilanti paper had gone to Kalamazoo to see Frederick Douglass speak about Lincoln’s assassination and share anecdotes about his own meetings with him during the Civil War, and urged him to come to Ypsilanti to repeat that speech.  So Douglass added another date on his calendar.”

“The second speech was much different.  It was about six months later (January 16, 1867), and it was a speech in support of radical reconstruction measures and a speech against then president Andrew Johnson.  So, Frederick Douglass was supporting things like suffrage of Black men, suffrage for Black women, all women.”

The third speech was much later.  “It was clear that the struggles did not win the Civil War, and many things were being reversed.  So what he’s actually doing here is urging Black people to continue in a process that has thrown them overboard in those last twenty years.  Was the tone a little bit different?  Very different.  It’s a very different tone in the later speech and is more purely political tone.  It’s a campaign speech for a particular candidate in the 1888 election.”