Long before it was known as the Paris of the Midwest, and more than a decade before it claimed its first major league team, Detroit set its sights on becoming the center of baseball—at least for a week. Just two years after the end of the Civil War, the city made its mark on the new sport by hosting the “World’s Base Ball Tournament.” 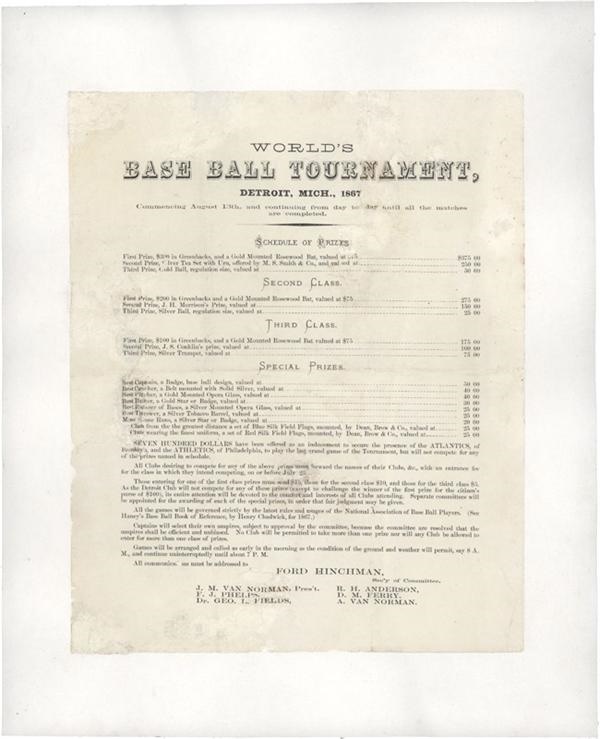 Detroit boosters erected a new ball field on Woodward Avenue and offered ample prize money hoping to lure the best teams from across the country to the Wolverine State in the summer of 1867. Organizers expected “a lively week” of games and a “multitude of visitors,” according to the Free Press. The game followed the rules printed in “Haney’s Base Ball Book of Reference” by Henry Chadwick, placing the pitchers 45 feet from home plate, inside a box four feet deep and 12 feet wide. The bases were 90 feet apart, walks were earned after three balls, and fielders could retire a batter by catching a foul ball after its first bounce.

To ensure participation from far and wide, the Detroit organizers promoted a first prize of “$300 in Greenbacks” and a gold-mounted Rosewood baseball bat, valued at $75, for the victorious team in a category called First Class. In addition to other team prizes, individual players would be singled out for outstanding performances. The best pitcher, catcher, coach, batter, thrower, and runner would earn prizes ranging from fancy badges to belts to an opera glass. A set of fine flags would be bestowed on the team who traveled the farthest, and another to the club wearing the snazziest uniforms.

Entry fees were based on the skill level, with $15 needed for the first-class clubs and then $10 for second class and $5 for third class. To lure high-quality opponents and hopefully generate a high amount of coinage at the ticket booth, the Detroit sponsors approached the Brooklyn Athletics and the Philadelphia Athletics and asked them to play in the final game of the tournament, but they refused the offer. The local organizers said Detroit’s top club wouldn’t compete in the tournament, but would instead use their time and effort “devoted to the comfort and interests of all clubs attending.”

Two days before the first game, the Detroit Free Press noted on the front page of its Sunday edition that the new baseball grounds “are in excellent condition.” The story also dispelled a rumor that games would be split between an old field and this new park. Organizers insisted that when the games began all contests would be waged on the new Woodward Avenue site, which had cost them $2,000 to construct.

Detroit’s Russell House Hotel was the tournament’s headquarters, increasing the usual “bustle and stir” around the city. A total of 24 teams had agreed to participate in the tournament’s three classifications, but only 17 made an appearance at the Russell House. The lowest class featured ten teams, including three from the host city. These ten Michigan-based clubs would begin play on Tuesday, August 13, at 8 o’clock in the morning, and continue throughout the afternoon. The tournament businessmen fixed ticket prices at 25 cents per person but added 50 cents if one parked their horse or buggy on the grounds. Game programs, the Free Press announced, would be distributed “at the gate, on the street-cars and at the hotels.”

While organizers hoped for large crowds, the opening morning followed a rainy night and overhead clouds threatened another shower. The field was “in rather bad condition,” according to the Free Press, but was quickly made playable by an energetic grounds crew. With only a one-hour delay, the field was ready for the opening game between the Oakland Club of Holly versus the Detroit Commercials.

The following morning, the Free Press used three of their eight front-page columns to detail the tournament’s first day. Stories included inning-by-inning play-by-play of the opener and box scores which included players’ names, positions, outs made, and runs scored. The first batter, identified in the Free Press account as Clark, “took his stick and struck a grounder to short stop making his first base, made his second on the first ball pitched, and came home on a passed ball.” Flowery language highlighted game descriptions—one player “could not make requisite time,” another made “a mild throw to third base,” and a man named Hall hit a “grass cutter to left field.” The Oakland club scored 43 runs but lost to the Detroit Commercial team, who tallied 52.

The Free Press featured two long columns of front-page baseball news on Thursday. Word around the city boosted the second day crowds. Free Press game coverage reduced inning-by-inning commentary but replaced it with lengthy statistics, including recording that a pitcher named Shaughnessy threw 71 pitches in one frame. Humor infiltrated some stories, as when Ann Arbor steamrolled Tecumseh, 50-11, in a game which ended after six innings, “for fear that Ann Arbor would score so many that they would be unable to count them.” Crowd estimates rose to around 3,000 people, with half being women, whose “charms of beauty” added to the day’s interest and excitement. 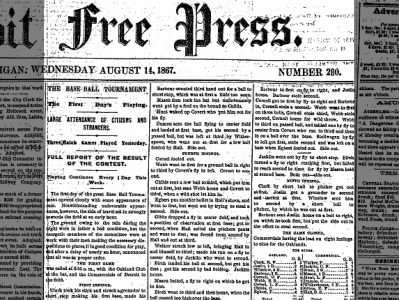 The opening round of the highly anticipated first-class clubs pitted the Hamilton (Ontario) Maple Leafs and the Port Huron Welkins. However, a communication problem prevented Port Huron from fielding a full team. Emergency baseball skills exhibitions kept the crowd entertained during the two-hour delay until a third-class game between Ionia and Flint could commence. Flint won 63-62 in a lengthy contest which lasted well over three hours and was plagued by poor throwing skills on the part of each squad. The Ionians were chastised for using gloves (made of buckskin) that were said to have hindered their fielding and possibly cost them a victory.

Tournament organizers hurriedly erected additional seating for day three. Crowds had now swelled to 5,000 when Ann Arbor lost handedly to a Canadian ball team in a morning contest. In the rescheduled first-class game, the Port Huron and Hamilton clubs squared off, only to see the Michigan club forfeit after their pitcher, named Blennerhasset, hurled 113 pitches in three innings and then promptly withdrew due to an injury.

One of the most highly anticipated games featured the high-powered Allegheny club from near Pittsburgh as they faced the Young Canadians of Woodstock. The Free Press noted that “enthusiasm was intense” and “gayety ruled supreme” at what might be the best game of the Detroit tournament. The star of the show was Pennsylvania pitcher Al Pratt, who hurled a gem and slugged a home run to support the Alleghenies’ 55-35 win.

Friday’s games were described as “three splendid match games witnessed” with victories by the Detroit Alerts, the Battle Creeks, and the Jackson Unknowns. The Hamilton Maple Leafs had jumped out to a quick lead over Jackson before the Unknowns stormed back with 11 and 13 runs in the fifth and eighth innings to secure the victory, 55-38, and a place in the championship game against the Alleghenies.

“The Star Game” is what the Free Press called Saturday’s title tilt between Allegheny and Jackson. It was also dubbed the “most interesting and exciting match yet played.” Few apparently believed the skilled boys from the east would lose, but they did. The Jackson Unknowns were down 13 runs at one point, but thanks to shoddy Allegheny fielding, they handed the game to the Michigan club, 29-26. Jackson fans rooted themselves hoarse during the contest. After the game, Allegheny boosters offered a purse of $500 for a rematch, which Jackson ignored. Two reversed calls (in Jackson’s favor) by Chicago Excelsior baseball club umpire J. H. Haynes tainted the outcome and probably led to the rematch offer.

The tournament concluded on Tuesday, August 20. A couple of teams failed to show and forfeited on the final day before Allegheny, replacing a no-show Jackson Unknown squad, played a newly organized Detroit club in a final game and won, 31-16.

Following the contest, the fancy prizes were awarded. Captain Conley appeared for the Jackson Unknowns and accepted the first-place award of $300 cash and the Rosewood bat. Second place went to Allegheny and third to the Hamilton Maple Leafs. Trophies for the second- and third-division clubs and the individual player honors were showcased on a table at home plate. Before presenting the awards, Dr. Van Norman, President of the Detroit Baseball Club, uttered a brief speech in which he dubbed the tournament a “brilliant success.” Someone at the Free Press created a gag prize of a large bag of peanuts to the Tecumseh team for the “Worst Beaten Club.” Tecumseh was not amused and refused to accept the award.

Following the festivities, the Allegheny club retired to the Cass Hotel and offered a resolution to the Detroit baseball fans and tournament organizers, thanking them for their hospitality. The Pennsylvanians then boarded a lake steamer bound for Cleveland and the ship’s captain feted the players with a complimentary meal, as he was so impressed by the visitors’ baseball skills.

As the teams left town, the Free Press predicted, “the base ball fever is likely to decline.” However, for a week in August 1867, big money and big prizes brought big-time baseball to the city of Detroit. The Chicago Tribune concluded, “The World Base Ball Tournament is finished, and throughout has been a perfect success.”

Image at top: “The American National Game of Baseball, Grand Match at Elysian Fields,” by Currier and Ives, 1866. From the Library of Congress.