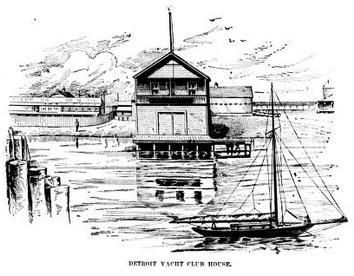 Searching the word yacht in the Detroit Free Press turns up a September 22, 1868 announcement of a local regatta to be held on October 1, 1868, consisting of five yachts (The Coral, Humming Bird, Collins, Norma, and Ripple) which would race from a point off Woodward Avenue ten miles North of Grosse Point on Lake St. Clair and then back, so we will use that date. A year later the Detroit Free Press also reports in some detail on a second regatta between the Barker, Collins, The Coral, and Humming Bird, with the Humming Bird winning. In the latter article, the editor comments that it would seem like Detroit would sponsor more yacht races and aquatic contests of various locations given its location on the Detroit River.