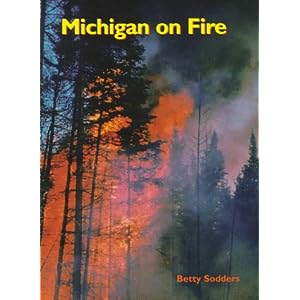 Holland, Manistee, and ninety percent of the homes in Michigan’s thumb were destroyed by a fire– the same day Chicago burned.

According to Mich-Again’s Day, students at Michigan Agricultural College struggled heroically to save Lansing.

Rapid population growth on the frontier, coupled with poor urban planning created a situation ripe for devastating urban fires in the late 19th Century. Cities throughout the Midwest such as Chicago, Pestigo, Wisconsin, Holland, Manistee, Ontonagon, Oscoda, and Huron City were all destroyed at least once in the period. A forty square mile swath of land from Saginaw Bay to Lake Huron was completely wiped out, killing over fifty people.

While there has not been an official tally of the Michigan portion of the 1871 fire’s devastation, an estimated two million acres burned, hundreds were made homeless, and over two hundred died. When fires returned ten years later to the same areas, the result was even more devastating, due to the downed trees and brush left over from the previous fire.

For more information about the 19th Century Michigan fires, see Michigan on Fire by Betty Sodders.