On Oct. 20, 1871, former Gov. Fred Green was born in Manistee. A veteran of the Spanish American War, Green served as the city attorney for Ypsilanti for a spell until he moved to Ionia. There, he ran for and won the mayor’s seat in 1913 and served until 1916.  While mayor He was instrumental in the establishment of the Ionia Free Fair in 1915 – at one time the world’s largest free-admission event of its kind.

On November 2, 1926, Green was elected Governor of Michigan. He was re-elected to a second two-year term in 1928. On May 18, 1927, the afternoon of the Bath School disaster, Green assisted in the relief work, carting bricks away from the scene. In 1928, he served as a delegate to the RNC which nominated Commerce Secretary Herbert Hoover for president.  During his administration, Green expanded a fish planting program and took part in the acquisition of seven state parks. He initiated a comprehensive budget system, authorized a new code of criminal practices, secured appropriations for a state hospital building program, and improved workmen’s compensation.

The Green administration was notably important in modernizing Michigan’s highways. He is touted as the “inventor of the no passing lane“, which was adopted as an important safety improvement throughout the country. He was also an early proponent of the Mackinac Bridge.

On October 22, 1927, Governor Green participated in the dedication of the new University of Michigan Football Stadium: “Michigan Governor Fred W. Green and his Ohio counterpart Vince Donahey, and Presidents C.C. Little of Michigan and George W. Rightmire of Ohio, led the massed bands of the two universities onto the field from the east tunnel. The bands paraded to the flag pole where the national ensign was raised and the vast throng stood bareheaded during the playing of the ‘Star Spangled Banner’ and ‘The Yellow and Blue.’

In 1927, he appointed Arthur Hendrick Vandenberg, who was editor of the Grand Rapids Herald, to the United States Senate to replace as the late Senator Woodbridge N. Ferris. He chose Vandenberg only when pressured to do so by the state Republican organization.

In 1928, Green’s campaign created the slogan “Keep Michigan Green” as a part of a fire prevention program. 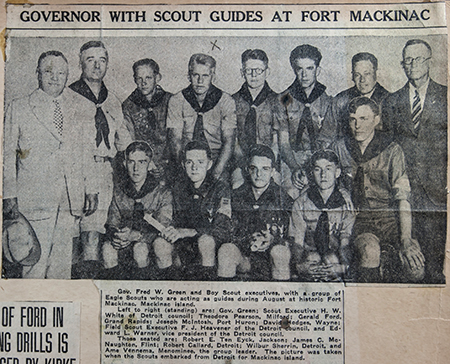