In the Battle Creek of the early to mid-1900s, he was as constant as the sunrise.

John W. Patterson (March 2, 1872 – August 23, 1940) , known to everyone as Pat, could always be found at the intersection of Capital and Michigan avenues, known locally as “bank corners” because of the three banks on the four corners.

He was Battle Creek’s traffic cop in the days before signals, motioning traffic through in a ballet of gestures and gyrations. And always, it was said, with a smile on his face.

More than that, though, Patterson was also Battle Creek’s first African-American police officer, and before that, a well-known baseball player and coach.

But there was even more. Pattterson became, if not a friend, then a confidant of heavyweight boxing champ Jack Johnson, sheltering him on his trips through Battle Creek.

Patterson was born in Omaha, Neb., in 1872 and made his way to Michigan in 1895 when he became player/manager for the Page Fence Giants of Adrian, a prominent Negro League baseball team that barnstormed all over the country. 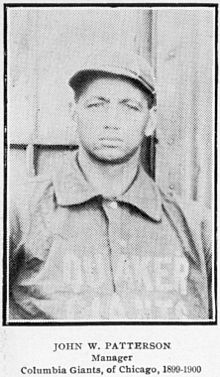 He also played semi-professional baseball in Philadelphia and New York City, even traveling to Havana, Cuba, with his team to play in a winter league.

In 1907, he came to Battle Creek and became head coach of the Battle Creek High School baseball team, winning a state title that same year.

In 1909, he became a patrolman with the Battle Creek Police Department in an era when, according to local historian Mary Butler, Battle Creek was a welcoming place for African-Americans.

But in 1917, when Camp Custer, which would later become Fort Custer, was created to train American soldiers for World War I, that changed.

And with that came an influx of soldiers, many from the south, who clashed often with the black residents.

Patterson saw what was happening and took a bold step, Butler said.

“He wrote a letter to the commander of Camp Custer where he said, ‘Your southern officers are bringing their attitude with them. They are bringing their segregationist attitude to this town.’ ” Butler said. “He must have had some standing in the community to do that. A young cop on the beat would not sit down and write a letter to a camp commander.”

Patterson was also known to have befriended the flamboyant African-American boxer Jack Johnson, who had enraged many white Americans by becoming heavyweight champion of the world in 1910.

Johnson made several trips through Battle Creek and was actually arrested in town on Jan. 14, 1913, with his white wife on a charge of violating the Mann Act which forbade “transporting women across state lines for immoral purposes.”

On several of Johnson’s trips through Battle Creek, Patterson would pick him up at the train station and house him in his own home so officials couldn’t find him. Then he’d usually leave unobtrusively the next day.

“He was trying to defuse the situation,” Laws said. “Being a police officer was more than just being a force of law. You needed to be a go-between for people and he was.”

Through his 39-year career as a policeman, Patterson was always remembered for his cheerful disposition and his desire to help wherever and whoever he could.

But in 1940, while assisting in the capture of an escaped patient from the Veterans Administration facility, Patterson suffered a rupture in his groin that eventually became infected. He died at age 68.

On December 31, 1999, a portion of East State Street adjacent to the department headquarters was renamed “John W. Patterson Way.”