Elbel, a student at the University of Michigan’s school of music, had been watching the match between the Wolverines and the University of Chicago Maroons from the stands. It was an intense match – a win would bring Michigan its first undefeated season since 1891 and the league championship. Michigan’s success was unclear to the end, until Michigan broke out a last-minute 12-11 win with a touchdown followed by an extra point. Michigan students who had traveled to Chicago for the game broke out in song and celebration, following their marching band into the streets of the big city.

Everything would have been perfect, except Elbel didn’t feel any of the marching band’s music lived up to the big occasion.

Elbel had a sister living in Chicago at the time, and as he made his way to her house, the first lines of the tune came to him. He rushed to her home and banged out the rest on her piano, then finished the piece off on the train back to Ann Arbor. When finished, he’d written a march for a 23-piece ensemble. 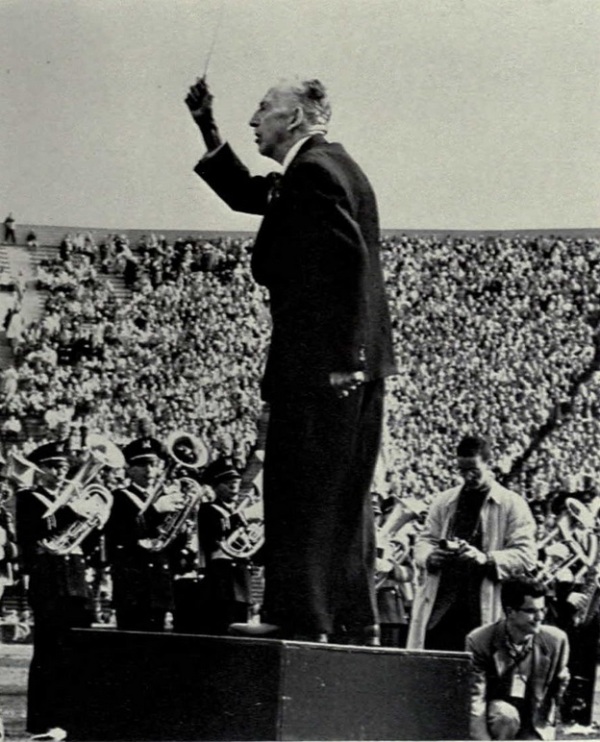 Louis Elbel conducts the University of Michigan Marching Band as they play “The Victors” in 1958.

Elbel premiered the song the following year to none other than John Philip Sousa, the “March King” who wrote such notable tunes as “Stars and Stripes Forever” and “The Liberty Bell” (later used by Monty Python as the ending tune as credits rolled on their Flying Circus television show). Sousa directed his own band in playing Elbel’s “The Victors.”

The catchy tune made the University of Michigan’s fight song one of the best-known college anthems. In fact, former president and Michigan alum Gerald R. Ford liked it so much that he sometimes instructed the Naval Band to play it instead of “Hail to the Chief” at official events. It was also the song that played at Ford’s 2006 funeral procession at the U.S. Capitol.

Elbel received the University of Michigan Band Alumni’s first Honorary Life Membership in 1951 for writing the song. The university’s Elbel Field is named in his honor.