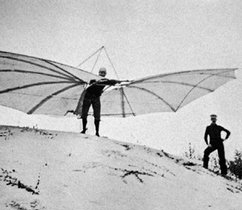 Herring about to launch a Lilienthal-type glider he built for Octave Chanute in 1894. 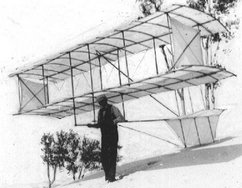 The Chanute-Herring glider at the Indiana Dunes in 1896.

In 1896 Augustus Moore Herring applied for what was possibly the earliest patent of its type in the country, a United States Patent for a man-supporting, heavier-than-air, motorized, controllable, “flying machine”. 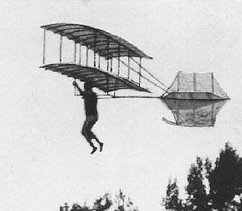 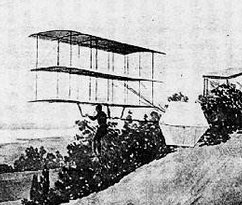 In late 1896, Herring tested a triplane, weighting it with sandbags to simulate the weight of a motor. 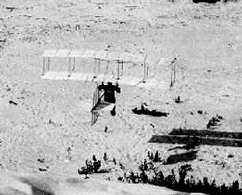 The Herring-Arnot glider of 1897 was very similar to the Chanute-Herring glider, but Herring made subtle improvements in the tail and the air frame. 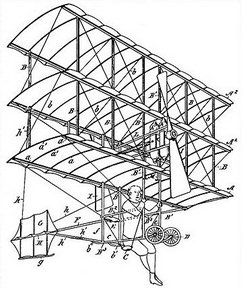 In 1897, Octave Chanute and Augustus Herring jointly patented a powered triplane, but Chanute would not consent to financing its construction.

In 1898, with funding from Arnot, Herring built a small biplane powered in the same manner as his joint patent with Chanute.

The compressed air engine used by Herring in his 1898 airplane. The motor was not powerful enough to sustain flight, but Herring managed some brief hops.

On October 11, 1899, Herring successfully flew his craft along the sandy shores of Lake Michigan at Silver Beach in St. Joseph, Michigan. According to Herring, this historic flight carried him approximately 50 feet.

Eleven days later, October 22, he managed an “eight to ten seconds”, 73-foot flight, as was witnessed by a newspaper reporter:

“During the flight, which lasted eight to ten seconds, Herring’s feet seemed to … almost graze the ground, which the machine skimmed along on a level path above the beach. The landing was characterized by a slight turning to the left and slowing of the engine when the machine came gently to rest on the sand.”

Herring’s craft was a biplane glider of his own design with a compressed air engine.

Interesting Side Note: “History is often shaped in favor of the storyteller” or in this case, “… by the number of storytellers.”  Augustus Herring’s first flight took place a few days before and his second flight took place a few days after an eventful visit by US President William McKinley on October 17, 1899.  President William McKinley was visiting Three Oaks, Michigan — just south of Herring’s St. Joseph, to dedicate a cannon captured during the Spanish-American War by Admiral Dewey.  Had the press coverage of Herring’s flight not been so distracted by this rare presidential visit, the world just might be more familiar with the name Augustus Herring than William and Orville Wright.

According to Phil Scott’s book, The Shoulders of Giants: A History of Human Flight to 1919, Herring’s glider was difficult to steer and because of his two-cylinder, three-horsepower compressed air engine, could operate for only 30 seconds at a time.

Tom Crouch, senior curator of aeronautics at the Smithsonian National Air and Space Museum in Washington, D.C. said that Herring’s flight, while first of its kind and truly on the road to bigger developments, “wasn’t significant”.

In his book, A Dream of Wings: Americans and the Airplane, 1875-1905, Crouch writes, “Herring’s 1898 motorized machine represented nothing more than the culmination of the hang-gliding tradition.  Having made his brief powered hops, he found himself at a technological dead end.”

Herring’s craft may have had issues to work through, however, it did show that such flight was “solvable” in Herring’s words.  Unfortunately a fire and financial problems prevented Herring from further experimentation.

Many aviation enthusiasts along with a growing number of historians consider Augustus Herring as the world’s true “First in Flight”.  Consider this: today’s hang glider pilots are still flying in the same manner as Herring, shifting their weight to control their craft.  The Wright Brothers, on the other hand, operated their “Flyer” with wing-warping mechanisms that were quite awkward and fell out of favor shortly after their first flight.