Great Lakes boat captains have always had a reputation for being a little salty. Maybe it’s the rough seas or long hours at the helm.

But not many skippers can say they’ve also been their island’s midwife, its postmaster, and later a cook and baker catering to millionaires aboard a Lake Michigan car ferry.

So in honor of Mother’s Day – and the upcoming sailing season – we’re tipping our caps to the memory of Florence Haas, the first licensed woman captain to pilot a passenger boat on the Great Lakes. Stories of her prowess on the water still linger in Northern Michigan’s Leelanau area and offshore on South Manitou Island, where her namesake Florence Lake continues to draw visitors.

Vignettes that detail her life show she had a steady hand with her boat, a steely nerve when it came to reading a storm – and more than her share of salty sass.

Case in point: A newspaper article hailing Haas’ accomplishments describes the time she had to calm a panicked lumberman when her boat was caught in a sudden squall on Lake Michigan. She was running him between South Manitou and the old resort town of Glen Haven on the mainland – the area now part of Sleeping Bear Dunes National Lakeshore.

Half-way into the 10-mile trip, “he became greatly alarmed and offered her $500 to turn back,” according to an article in the Grand Rapids Evening Press. “With a flash in her blue eyes, she turned upon him and said: ‘You keep still and I’ll land you on the other side for 50 cents, which is the regular fare.’ ” 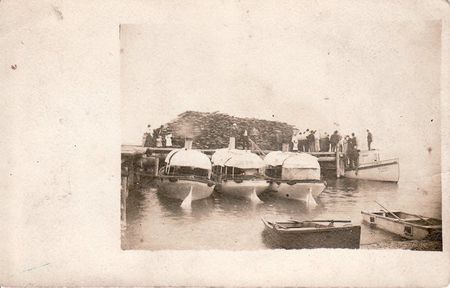 Haas’ love for being on the water likely ran in her DNA, according to numerous newspaper clippings and family remembrances shared with us by the Leelanau Historical Society & Museum.

Her father, Isaac Raymo, had a resume that included deep sea diver, lumberjack and boat captain by the time he and his wife, Isabelle, moved their family from Wisconsin to South Manitou Island in the 1870s. Florence was the second-oldest girl in a family of 11 children.

By 16, she’d gone to Manistee to elope with Joseph Haas. Why the quickie wedding? It seems the headstrong Florence was a lot like her future mother-in-law.

The young couple returned to the island, where they ran a small farm on the west end by the lighthouse. They raised three children on an income from farming, fishing, then later running a mail boat and passengers several times a week between the island and the mainland.

They made the 20-mile round trip by sailboat, the Reliance, then later switched to a gas-powered engine. They also sailed often to Green Bay, sometimes sailing through the night at 12 mph with Florence Haas at the helm while her husband and son slept on the boat, according to newspaper accounts.

Haas’ sailing abilities and her gender began making headlines. Some described her as the “fair skipper,” and others announced “Woman captain is pride of officers.” They talked about her making “perilous trips,” while emphasizing her ladylike appearance, as if the two should be at odds.

According to one article with a Holland dateline:

“There is not a better sailor on the lakes than the captain of the Reliance,” said Lieutenant Ballinger of Chicago at Macatawa Park the other day. Mr Ballinger is government inspector of the lifesaving stations in this district and his remark was made while in conversation with Captain Morton of Grand Haven, superintendent of life saving stations in the district, who echoed the statement. The captain of the Reliance is a woman, and it was to this everyday modest, womanly woman, whose home is on the bounding waters, that these men, whose positions gave them the ability to judge, paid so high a tribute.”

In 1912, Haas found herself widowed and carrying on with the mail route alone. Joseph Haas drowned in Lake Michigan that year. According to accounts, he was moving a case of beer from his boat when he lost his footing and fell, hitting his head and landing in the water. Rescuers tried to help him and reported seeing air bubbles in the water, but could not reach him in time.

Relatives’ accounts say Haas continued her captain’s duties for another five years before going to work on boats and car ferries that carried passengers on the Great Lakes. She was a cook and baker aboard these ships, which led her to rub elbows with some famous passengers.

A grandson, Theron Haas, wrote this remembrance of his grandmother’s encounter with industrialist and Ford Motor Company founder Henry Ford:

“Mr. Ford was trying to get the Railroad Company to make a connection at Escanaba. As the Company already had 4 ports of call on that side of the lake and with only 4 boats they felt they already had a full plate. Anyway, getting to Escanaba in the winter was harder then Menominee, which was bad enough. Mr. Ford came to Frankfort one day and arranged for the carferry No.4 to take him and his entourage to Escanaba. Grandma was first cook and my mother was cabin maid.

>The boat left Frankfort in the morning. Mr. Ford came back to the galley where he engaged my grandmother in conversation. There was a large passage way between the galley range and the pantry. It was like a doorway and Henry stood in this, leaning against one side and his arm across the top to the other door jam. There was plenty of room for Florence to pass by him and under his arm. She was preparing dinner and, among other things, she was preparing pies for the oven.

According to my mother, he tried every which way to get one of those pies. Even offered her $5.00 for one. She told him there was just enough to go around and he would get his share at meal time. I guess she just couldn’t be bribed. Can you imagine telling someone like Henry Ford he couldn’t have something he wanted, in that day and age? He went ashore in Escanaba and had a meeting with the city fathers. The whole trip must have been a big disappointment for him. He didn’t get all the pie he wanted and the carferry’s never stopped at Escanaba.”

She was irked when a cost-cutting carferry official told her to stop baking fresh bread in the galley kitchen and start serving the day-old loafs he had delivered from a mainland bakery. She got even more ticked when she noticed gallons of red paint that had been delivered to the ferry ended up coating the barns at this same official’s farm, all painted by ferry workers.

To make her point, she had the porters throw a shipment of day-old moldy bread overboard, then went to the manager’s office to underscore her knowledge of his deception.

“She went over to the office and told the Superintendent what she had done. He flew into a rage! He didn’t stay raged very long. She got out her ‘little black book’ and recited the incident with the red paint. He folded. She got her lard, flour and yeast,” her grandson wrote.

Haas moved away from her beloved Great Lakes for her retirement. She invested in Texas real estate and lived her final years in Galveston. She made her last trip to Michigan to visit relatives in 1942, a year before her death.

She’d made arrangements to be buried in Green Bay, next to family, because by that time, South Manitou was considered to be too remote for a resting place, her relatives said.

In the decades that followed, her grandchildren said they found letters and other mementos detailing Haas’ remarkable career on the Great Lakes. Some contained a glimpse into her island days, and how she’d carved a life of “firsts” from her corner of the world.

From her great-grandson Don Roy’s essay:

“She often spoke of the old days on the island and I always listened. She gave me a five-generation picture of our family. She was always proud of her heritage. From her English mother she traced her origins to colonial times. Her father was French. I sometimes wonder if her French-English background did not often set her apart from the other German settlers on South Manitou Island.”

>Most of all, her grandchildren remember her as seeming full of hope. She had a certainty that things would always get better.

“They do not make her kind any more. The mold must have been lost!” 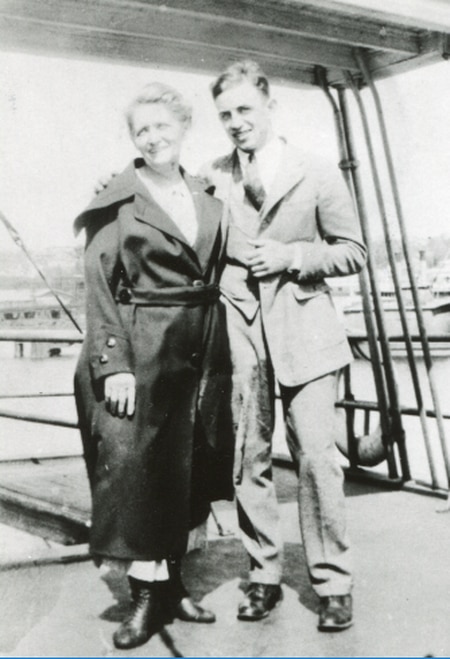 Florence Haas, circa 1920, standing with Archie Roy, who married her granddaughter.