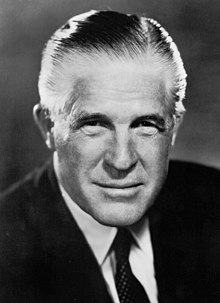 George Wilcken Romney (July 8, 1907 – July 26, 1995) was an American businessman and Republican Party politician. He was chairman and president of American Motors Corporation from 1954 to 1962, the 43rd Governor of Michigan from 1963 to 1969, and the United States Secretary of Housing and Urban Development from 1969 to 1973. He was the father of former Governor of Massachusetts and 2012 Republican presidential nominee Mitt Romney and the husband of former Michigan U.S. Senate candidate Lenore Romney.

Born to American emigrants in Mexico, Romney (1907-1995), was an auto-industry titan who resigned from the American Motors Corp. to run for Michigan governor in 1962. Our 43rd governor — the state’s first Republican executive in 15 years — served from 1963 through 1969. Known as “the spokesman for a better Detroit,” Gov. Romney tackled economic doldrums and strongly supported what was then the new Michigan Civil Rights Commission as he took on housing segregation. As his son, Mitt, would do a generation later, Romney ran for president in 1968 but dropped out early in the Republican primary contest. He later served as President Richard Nixon’s secretary of Housing & Urban Development.