In 1912 Cadillac fitted the first starter motor as standard equipment on its Model 30.

This deceptively simple device made it possible for anyone , no matter what their strength, to turn over a multi-cylinder internal combustion engine without fear of sustaining injury by the hand crank when the engine backfired or the cranked kicked back.

Indeed, until Charles Kettering invented the electric starter you could die starting a car. In early 1908, a woman stalled her Cadillac on Belle Isle, near Detroit, Michigan. She did not have enough strength to crank the engine to restart it. A passing motorist offered to help. His name was Byron Carter and he just happened to be a friend of Cadillac founder Henry Leland.

So Carter cranked the Cadillac’s motor. It backfired .The crank hit him in the face breaking his jaw. Carter was admitted to hospital but infection and gangrene set in and in those days without antibiotics he died.

Carter’s death led Leland to vow that Cadillac would rid its cars of the hand starter crank. And so he called on Charles Kettering, who owned Dayton Engineering Laboratories Company. You and I know it better by its acronym: DELCO.

Kettering was an inventor/businessman, in the Thomas Edison mould. Born on a farm, he held a series of jobs until landing at the National Cash Register Company (NCR) where he invented the electric motor for cash registers. Then he set up DELCO. The company quickly built the electric starter device. It was tested in 1911 and introduced in Cadillac’s 1912 models.  Kettering filed for a patent on his self-starting device on April 17, 1911; but it was not granted or “published” until February 8, 1916. 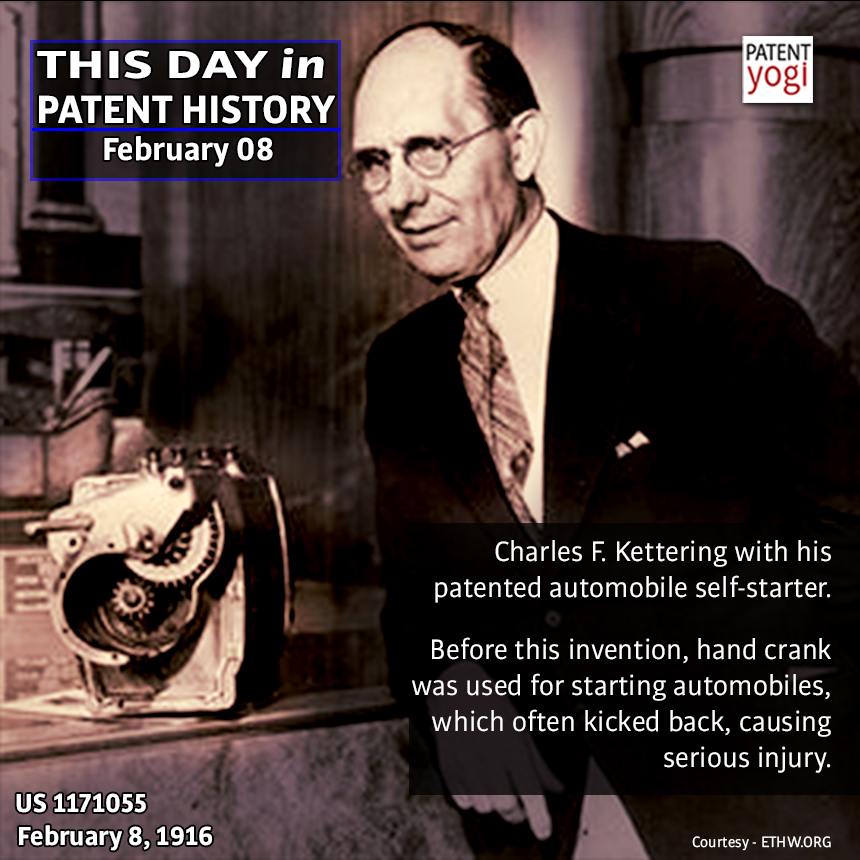 The impact on the automobile industry was immediate. Within five years self starters would come standard on nearly every new automobile. By making cars easier and safer to operate, especially for women, the self-starting engine caused a huge jump in sales. The American car industry never looked back.

DELCO was bought by General Motors (GM) in 1919 and Kettering became GM’s head of technology. During his time at GM he oversaw the development of leaded petrol, the fast drying duco paint, light weight diesel engines for trains and trucks and GM’s first OHV V8-the Oldsmobile rocket 88.

When he died in 1958 held 140 patents in his own name., which is why he is widely quoted as saying :” If you want to kill any idea in the world, get a committee working on it.”

According to the Soo Evening News, iCharles F. Kettering demonstrated his electric automobile starter (on February 11, 1911) by installing the device in a Cadillac in Detroit and starting the motor with just the press of a switch, replacing the need for hand-cranking.

According to This Day in History by History.com, Kettering received his patent for the electric automobile self-starter on August 17, 1915.