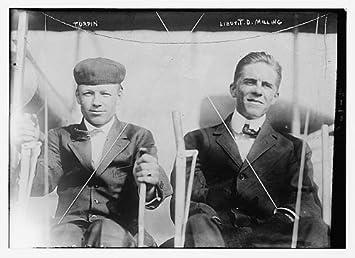 On September 12, 1911 J. Clifford Turpin of the Wright Brothers’ Exhibition Team performed the first airplane flight over Grand Rapids, starting at the West Michigan State Fair at Comstock Park. The new Model B aircraft featured two seats, one for the pilot and one for a passenger. The prop faced backwards! The plane was only 26 feet long with a wingspan of 39 feet and featured wheels instead of skids.

J. Clifford Turpin, taught to fly by Orville Wright, was the first Purdue University graduate (class of 1908) to become an aviator. Turpin set an altitude record of 9,400 feet in 1911, establishing a Purdue alumni tradition that was continued 55 years later, when an X-2 aircraft flown by Captain Iven C. Kincheloe (BSAE 1949) set an altitude record of 126,000 feet in 1956. That record was subsequently surpassed by alumni Neil A. Armstrong (BSAE 1955) and Eugene A. Cernan (BSEE 1956) during their flights to the moon.

After the Wright Brothers’ Exhibition Team was disbanded in 1911, Turpin and his flying partner Phil Parmalee rented Wright Model Cs (with a stronger motor and a propeller facing forward) for their own exhibitions, which normally featurede spins and rolls, and then Parmalee would carry one of their flight team a few thousand feet into the air, where the man would then do a parachute jump. Turpin and Parmalee would then have a five-mile airplane race, and the show would end with Parmalee taking his biplane as high as it could go, and then descending in a “dip of death” dive.

While conducting such as exhibition in a Seattle stadium, Turpin clipped a pylon avoiding a cameraman, and veered into a grandstand, killing several spectators and injuring many others. Turpin was pulled from the wreckage of his plane, alive but with his face badly crushed. The crowd helped move the injured into automobiles for quick transport to the county hospital in Georgetown. Since many remained after the accident, the management asked Parmalee to go up and continue the show!

That evening, Clifford Turpin spoke to reporters from his hospital bed, and described the accident from his perspective. He only caught a glimpse of the photographer who ran out in front of his plane and caused the accident. When Turpin was told that spectators had been killed, he replied sadly, “The only thing I wish is that I had been killed myself” (Seattle Post-Intelligencer, May 31, 1912).

While Turpin recovered in the hospital, Parmalee traveled to Yakima to participate in another air show. During the exhibition on June 1, a gust of wind caused Parmalee’s plane to crash, killing him instantly. Upon hearing the news of his partner’s death, Turpin vowed to never fly again. As a result, unlike many early pilots, Clifford Turpin lived to the ripe old age of 79.

Note: Turpin is sitting on the left in the pilot’s seat of the Wright Model B in the featured photograph.

History of the Purdue School of Aeronautics and Astronautics