When the Rouse Simmons went down, it was the end of an era: The last hurrah for a dying age of wooden schooners and the final act of the Great Lakes’ real-life Santa Claus. Although the exact time the Rouse Simmons sank is unknown, it is usually attributed to November 23, 1912.

The Rest of the Story

In the late 1800s and early 1900s ship owners and crews who normally ran lumber soon found out that making one last run on the lake with freshly cut Christmas trees could result in a very nice profit.   It was most times the last run of the year on the lake before the gales of November became deadly.

Since 1896, Herman Schuenemann had been transporting Christmas trees to Chicago. However it was his older brother August (nicknamed ‘Christmas Tree Schuenemann’) who first began to deliver cargoes of evergreen trees to Chicago in 1876. Tragically, August was lost to the lake in 1898 when his own ship S. Thai sank in a November storm near Glencoe, Illinois. Ironically, August’s ship was also carrying Christmas trees when it went down.

A painting of the Christmas Tree Ship in Chicago courtesy of the Chicago Maritime Museum.

Captain Herman Schuenemann also had his own nickname — Captain Santa —  and his boat was always called the Christmas Ship by Chicagoans. Every year he also  would dock his schooner on the river in Chicago and sell his trees directly to his customers. He was the hit of the season loved by locals. Herman was known for providing the cheapest and freshest trees having a pleasant and distinctive smell. And Captain Santa was known for giving away trees to families who could not afford the fifty cents to one dollar he charged. After a long season of hauling lumber it made for a nice Christmas bonus for him and his crew, and Christmas cheer for the folks of Chicago.

In the year 1912 Captain Santa told his wife this would be his last trip, as he was getting old, and so was his ship. He sailed to Manistique’s Thompson’s Harbor on Michigan’s Upper Peninsula and loaded the Rouse Simmons with over 5000 trees, setting sail for Chicago around noon on November 22nd.

Winds picked up that night to near 70 knots and the schooner, her crew and some passengers, a total of 16 were lost in the storm. Three other ships were lost that night as well.  Chicago grew anxious awaiting the arrival of their Christmas Tree Ship, but it never arrived.  The next year the city of Chicago erected it’s first City Christmas tree in honor of the Captain and his crew. Over 100,000 citizens attended. 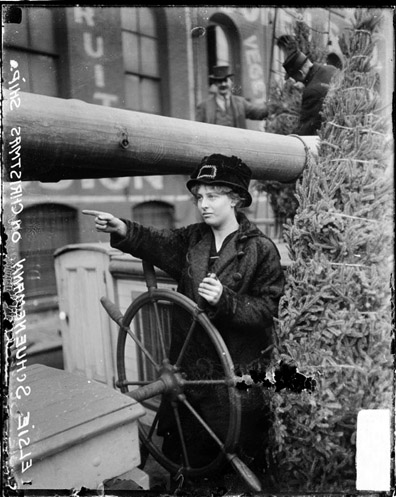 The Christmas Tree Ship was gone, but Schuenemann’s daughters (including Elsie in the above picture) kept the tradition alive for another twenty  years, bringing trees in by schooner and selling them along Chicago’s waterfront.

And the vibe lives on today, as the U.S. Coast Guard Cutter Mackinaw hauls its load of trees from northern Michigan to the Chicago Navy Pier each year. The trees are donated to help make Christmas a bit brighter for deserving families throughout the city—a gesture that picks up right where Captain Santa left off.

Nearly 60 years later, divers discovered the wreck lying on the bottom of the lake off the coast of Two Rivers, Wisconsin. Most of its hull was covered with mussels, and clusters of trees were still in the ship’s hold—some still hanging on to their needles.

Resting on the bottom of Lake Michigan.

“Lost to the Lake: The Last Voyage of The Christmas Tree Ship“, Lake Effect Living.

Fred Neuschel, Lives and legends of the Christmas tree ships, Ann Arbor : University of Michigan Press, c2007. :  Lives and Legends of the Christmas Tree Ships brings the maritime heritage of the Great Lakes to life, using the tragic story of the schooner Rouse Simmons as a porthole into the robust but often forgotten communities that thrived along Lake Michigan from the Civil War to World War I. Memorialized in songs, poems, fiction, and even a musical, the infamous ship that went down in a Thanksgiving storm while delivering Christmas trees to Chicago has long been shrouded in myth and legend. As a result, the larger story of the captain, crew, and affected communities has often been overlooked. Fred Neuschel delves into this everyday life of camaraderie, drudgery, ambition, and adventure—with tales of the Midwest’s burgeoning immigrant groups and rapid industrialization—to create a true story that is even more fascinating than the celebrated legends.