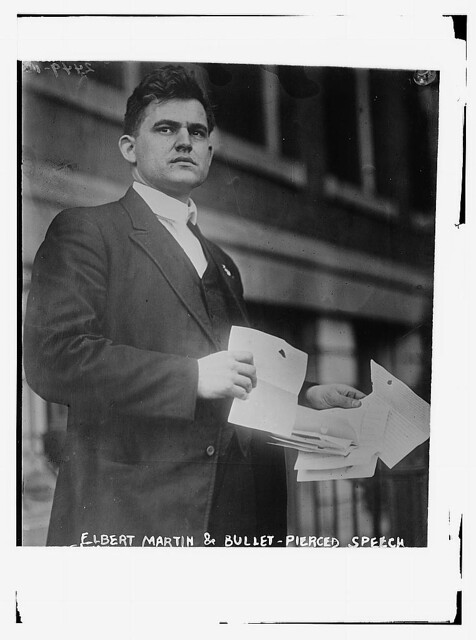 News traveled by wire 100 years ago and took a little longer than today’s internet….

An insane man attempted to end the life of the only living ex-president of the United States and the best known American, Teddy Roosevelt.

The bullet failed of its mission.

Elbert Martin, Colonel Theodore Roosevelt’s stenographer, body guard, former football player, and graduate of the Detroit College of Law, grappled with the assassin and prevented him from firing a second shot.

Roosevelt, as an experienced hunter and anatomist, correctly concluded that since he was not coughing blood, the bullet had not completely penetrated the chest wall to his lung, and so declined suggestions he go to the hospital immediately. Instead, he delivered his scheduled speech with blood seeping into his shirt. He spoke for 90 minutes. His opening comments to the gathered crowd were, “Ladies and gentlemen, I don’t know whether you fully understand that I have just been shot; but it takes more than that to kill a Bull Moose.” Afterwards, probes and x-ray showed that the bullet had traversed three inches (76 mm) of tissue and lodged in Roosevelt’s chest muscle but did not penetrate the pleura, and it would be more dangerous to attempt to remove the bullet than to leave it in place. Roosevelt carried it with him for the rest of his life.

Letters and telegrams from every part of the country hailing him as a hero are being received by Elbert A. Martin, Secretary to Col. Roosevelt, who on Monday night leaped upon the Colonel’s assailant and prevented the firing of other shots toward him. “Hail Martin as Hero”, New York Times, October 18, 1912.

Col. Theodore Roosevelt, carrying the leaden missile intended as a pellet of death in his right side, has recovered. He is spared for many more years of active service for his country.

John Flammang Schrank, the mad man who fired the shot, is in the Northern Hospital for the Insane at Oshkosh, Wis., pronounced by a commission of five alienists a paranoiac. If he recovers he will face trial for assault with intent to kill.