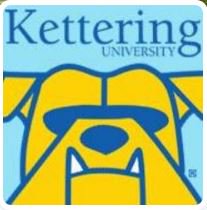 Sometimes referred to as the “West Point“ of industry,” GMI focused on creating business and industry leaders through the unique co-op model (following the development of this program at the University of Cincinnati in 1907). GMI also pioneered freshmen level manufacturing courses (Production Processes I & II), and automotive degree specialties. A fifth-year thesis requirement was added in 1945, along with the ability to grant degrees. The first bachelor’s degree was awarded on August 23, 1946. The co-op program required applicants to find a GM division to be their sponsor. Work and school were mixed in six-week rotations, dividing the student body into A-section and B-section. At any given time, when A-section was in school, B-section was at work. After six weeks, B-section would go back to school and so on. This resulted in students moving eight times per year and a 48-week school/work year. Because General Motors used the school to train its engineers, tuition was partially subsidized. In June 1979 (the Class of 1984) co-op rotations were expanded to twelve weeks.

After GM reduced operations in Flint, the company and the university separated on July 1, 1982. The name of the institution became “GMI Engineering & Management Institute” and the letters “GMI” were retained to allow easy identification with the old General Motors Institute. The university began charging full tuition as an independent private university. The university kept the cooperative education model, expanding the number of co-op employers for students. The university also began offering graduate programs for both on- and off-campus students

Name change and expansion of programs

The university’s name was formally changed to Kettering University on January 1, 1998, in honor of Charles Kettering. The name change allowed the university to create a separate identity from General Motors as well as publicize the fact that academic programs were expanding beyond just automotive-related offerings.

The university launched a physics program in 1995, and had the first ABET-accredited applied physics program in the world in 2013. A chemical engineering program as well as a pre-med course of study were launched in 2008. The chemical engineering program received ABET accreditation in 2013. The computer science program received ABET accreditation in 2007. The university added an applied biology program in 2013.