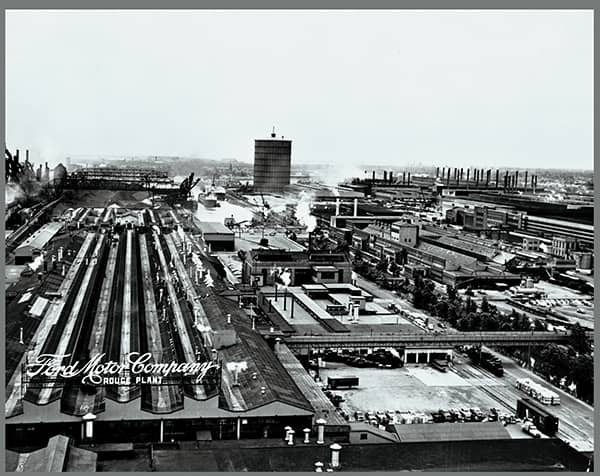 On May 17, 1920, the blast furnaces at the Ford Rouge Plant were fired up for the first time. Iron from the furnaces was transported directly to the foundry where it was poured into molds to make engine blocks, cylinder heads, intake and exhaust manifolds, and other automotive parts for the Model T (which was still assembled at Highland Park).

Ford began buying the property that was to become the Rouge in 1915. In total, he acquired a 2,000-acre stretch of bottomland along the Rouge River. The Rouge River property still was not earmarked for any particular use. Ford had even considered turning the land into a large bird sanctuary. That changed near the end of World War I, when Undersecretary of the Navy Franklin D. Roosevelt engaged Henry Ford to build boats.

In 1917, a three-story structure, Building B, was erected on the Rouge site to build Eagle Boats, warships intended to hunt down German submarines. Building B was the first substantial Rouge building and today serves as part of the Dearborn Assembly Plant. Although the war ended before the Ford Eagle Boats ever went into action, the effort did allow Ford to widen the Rouge River substantially, presenting the possibility of bringing ore boats up the river.

The Rouge soon became the destination of massive Ford lake freighters filled with iron ore, coal, and limestone. The first coke oven battery went into operation in October of 1919, while blast furnaces were added in 1920 and 1922. Iron from the furnaces was transported directly to the foundry where it was poured into molds to make engine blocks, cylinder heads, intake and exhaust manifolds, and other automotive parts. The foundry covered 30 acres and was, at its inception, the largest on Earth. In 1926 steelmaking furnaces and rolling mills were added. Eventually, the Rouge produced virtually every Model T component, but assembly of the Model T remained at Highland Park.

The first land vehicles actually assembled in the Rouge were not cars but farm tractors. No sooner had Henry Ford achieved low-cost transportation with the Model T than he set his sights on doing the same for the world’s farmers. In 1921 production of the world’s first mass-produced tractor, the Fordson, was transferred from the original Dearborn plant to the Rouge.

Ford put a mammoth power plant into operation in 1920 that furnished all the Rouge’s electricity and one-third of the Highland Park Plant’s needs as well. At times, surplus Rouge power was even sold to Detroit Edison Company. An innovative glass plant began operation in 1923. Utilizing a continuous process that Ford had helped develop, it produced higher quality glass at lower cost. In 1928 the Model A became the first low-priced car to use laminated safety glass. By 1930 the Ford was making its own safety glass at the Rouge.

The Rouge achieved the distinction of automotive “ore to assembly” in 1927 with the long-awaited introduction of the Model A. Building B would be the home of assembly operations from that time forth.