On this day, the State of Michigan began a state ferry service from Mackinac City to St. Ignace to connect the Upper and Lower Peninsulas — a service that continued until the opening of the Mackinac Bridge in 1957. 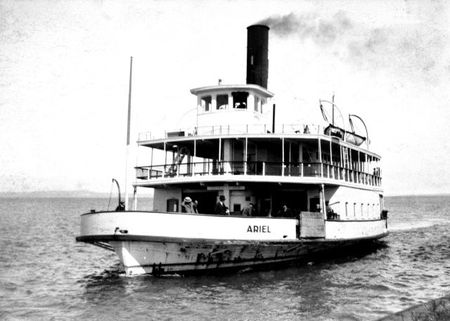 The first car ferry was the Ariel, a river boat which had previously served as a ferry between Walkerville, Ontario, and Detroit. It could only hold 20 cars and was later sold in 1924 to serve as a ferry between Port Huron and Sarnia. Visit the link below to learn about other Michigan car ferries.

During the November deer hunting season, thousands of hunters jammed the docks and the adjoining highway while they waited to board the ferries. Patient veterans of the Straits crossing would calmly munch hot pasties sold by car-to-car vendors and feed the ever-present sea gulls. Long delays were infrequent, however, and service went on day after day and year after year with few interruptions

Nate Reens, “Before the Bridge: See the historic ferries of the Straits of Mackinac“, MLive, May 21, 2019.